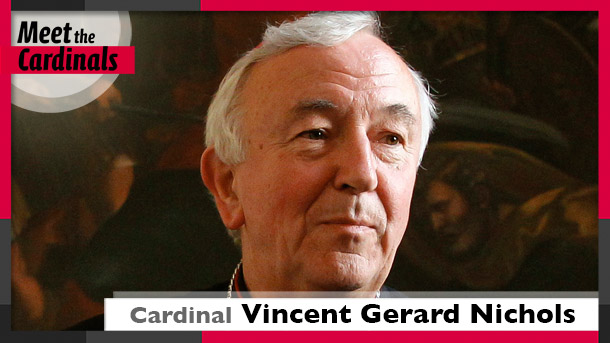 By Simon Caldwell Catholic News Service
LIVERPOOL, England (CNS) -- It was not in the silence of a dimly lit church or in the cool hush of an evening breeze that Vincent Nichols recognized he had a vocation to the priesthood, but in the heaving swell and bustle of a soccer crowd.
A lifelong supporter of Liverpool Football Club -- one of the most successful British soccer clubs of all time -- Nichols stood on the terraces of the home ground, thronged by boisterous fans, and repeatedly found himself in a conversation with God.
"I'd go to watch Liverpool ... and say to God: 'Why don't you just leave me alone? Why can't I just be one of a crowd?'" he said in an interview in 2007.
But God would not leave him alone, and today he is the archbishop of Westminster, which covers London north of the Thames River; on Feb. 22 Pope Francis will elevate him to cardinal at a consistory at the Vatican.
Cardinal-designate Nichols said he was "deeply moved by the honor conferred upon the Catholic Church in England and Wales" by his appointment as cardinal Jan. 12.
He said his new office "enables me, on behalf of all, to serve the pope in a direct and prolonged way."
Cardinal-designate Nichols, 68, was one of three sons of Catholic schoolteachers, Harry and Mary Nichols, and was born and raised in Crosby, the affluent and deeply Catholic Liverpool suburb.
He attended high school at the Christian Brothers-run St. Mary's College, Crosby, and, played on the school cricket team. Like his brothers, John and Peter, he was a competent musician. He served as an altar boy before he entered the priesthood at the Venerable English College in Rome in 1963.
He earned degrees in philosophy and theology at Rome's Pontifical Gregorian University and was ordained priest in Rome in 1969 for the Archdiocese of Liverpool.
For more than a decade he served in parishes of the archdiocese, where he was noticed as a very able and intelligent priest.
As a result in 1984, he was appointed general secretary of the Bishops' Conference of England and Wales, and in 1992, he was consecrated auxiliary bishop of Westminster.
Throughout the 1990s Bishop Nichols was spoken of as a protege of Westminster Cardinal Basil Hume and also as his likely successor.
A number of church pundits were surprised, therefore, when Bishop Nichols was appointed archbishop of Birmingham in 2000 and Cardinal Hume was succeeded by Cardinal Cormac Murphy-O'Connor.
As archbishop of Birmingham he proved himself to be a skilled and shrewd administrator when he successfully oversaw the implementation of a renewed safeguarding framework in the wake of clerical abuse scandals.
He apologized publicly to abuse victims, settled outstanding claims for compensation and became the head of the newly formed Catholic Office for the Protection of Children and Vulnerable Adults.
As chairman of the bishops' Department for Education, he successfully opposed government plans to impose quotas of non-Catholic students in state-funded Catholic schools.
He was less successful in trying to prevent Parliament from imposing gay adoption on Catholic agencies, a policy that saw the English and Welsh church lose its adoption services. He foresaw the problem, warning in a 2006 homily that the state was trying to impose its own version of morality upon the church.
Nichols finally returned to Westminster in 2009 as archbishop, taking over from Cardinal Murphy-O'Connor, who had reached the retirement age of 75.
Speaking to the press for the first time in his new capacity, then-Archbishop Nichols spoke of the joy of serving in Birmingham and how he would miss visiting the parishes and schools of the archdiocese. But one journalist grumbled afterward that he had raised the subject of soccer just 10 minutes into his opening address.
Soccer might have been a subject close to the cardinal-designate's heart, but it was not going to set his agenda. As president of the bishops' conference, he galvanized the faithful by bringing the relics of St. Therese of Lisieux to Britain in 2009, and the following year welcomed Pope Benedict XVI to England in a visit the retired pope has referred to as a highlight of his papacy.
In 2012, the cardinal-designate ordered the perpetual adoration of the Blessed Sacrament for the duration of the London Olympics as part of massive church efforts both to care for visitors and to evangelize.
Cardinal-designate Nichols has always been popular with the clergy, but he has endured criticism from some Catholics because of his openness to homosexuals and his apparent reluctance to halt controversial Masses held especially for them.
He has, however, been at the vanguard of efforts by the church to oppose the legal redefinition of marriage under the 2013 Marriage (Same-Sex Couples) Act. He also has upheld the rights of migrants at a time when many Britons are unsettled by mass migration.
Under his leadership the Church in England and Wales has become counter-cultural without being abrasive, a reflection, perhaps, of the charm, tact and warmth of personality of Cardinal-designate Nichols himself.
This is also reflected in good relations with the Anglicans in spite of what some see as insurmountable obstacles to Christian unity.
Following the Jan. 12 announcement, Archbishop Justin Welby of Canterbury, leader of the worldwide Anglican Communion, tweeted that he was "delighted" by an appointment that "strengthens the church in this country."
Archbishop John Sentamu of York, the second-most senior Anglican leader in Britain, also hailed the "good news" with a tweet that noted Cardinal-designate Nichols will soon be wearing the same color as his beloved Liverpool Football Club: "My dear brother in Christ, Archbishop Vincent Nichols is to be made CARDINAL. Red C's hat & Red shirt: Liverpool FC!"
---
(CNS Photo/ Paul Haring)