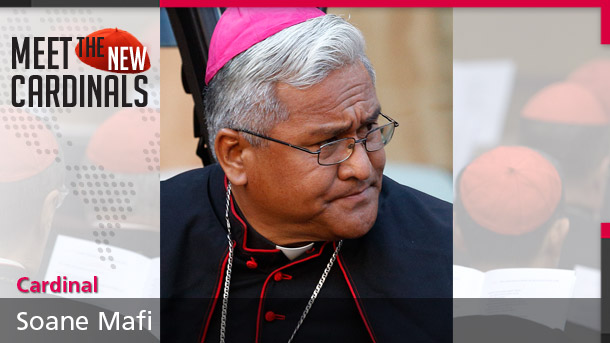 By Patrick Downes Catholic News Service
HONOLULU (CNS) -- When Tonga's future cardinal came to Hawaii as a priest in 2005 for the ordination of his cousin, one of the Tongan Catholic women hosting him wanted to buy him a pair of shoes. Then-Father Soane Mafi politely turned down the offer, preferring instead the sandals he was already wearing.
A few years later, then-Bishop Mafi again visited Hawaii, and his cousin, Sacred Hearts Father Johnathan Hurrell, invited him to his parish in Waialua, where he was parochial vicar. They celebrated a weekday Mass together, but Father Hurrell was unsure of the protocol of concelebrating with a bishop. His cousin put him at ease.
"He told me that he would be my altar server," Father Hurrell said, "and he did. The small weekday congregation was delighted."
"He's a simple man," Father Hurrell said. "Very humble."
Father Hurrell, who is now the provincial superior of the Congregation of the Sacred Hearts of Jesus and Mary, spoke to his cousin shortly after Pope Francis' Jan. 4 announcement that he would be among the church's newest group of cardinals. He said the bishop told him he was awakened that day at 4 a.m. by his brother in San Francisco, who gave him the news.
According to Father Hurrell, Bishop Mafi told his brother that he was mistaken and went back to sleep.
In the morning, discovering that his brother was correct, he "quietly cried," Father Hurrell said.
"He's very warm, genuine, very real," he said.
Father Hurrell was born in New Zealand but spent about 15 years of his youth in Tonga.
The priest said he and the cardinal-designate, who is four years older and one of seven children, grew up together and were probably considered the least likely in the family to become priests.
"We were the most rascal of the kids," he said.
Father Hurrell said the cardinal-designate "is encouraging, supportive and a mighty preacher."
He also has a great sense of humor.
"He loves to laugh," the Sacred Hearts priest said.
Soane Patita Paini Mafi was born in the Tongan capital of Nuku'alofa Dec. 19, 1961, the son and grandson of catechists. He joined a parish youth group growing up in the settlement of Kolofo'ou, near the capital, on the main island of Tongatapu.
He studied at the Pacific Regional Seminary in Suva, Fiji.
Ordained a priest June 29, 1991, he spent four years at Ha'apai parish on an outer island. In 1995, he became vicar general.
In an interview with Catholic San Francisco in 2008, Bishop Mafi said his bishop sent him for three years of study at then-Loyola College in Baltimore. After he graduated in 2000, he returned to Fiji to join a formation team training local priests.
He was named coadjutor bishop of Tonga in 2007 and bishop of Tonga in April 2008, the first Tongan diocesan priest to be named a bishop.
He told Catholic San Francisco that, at the time, he was both eager and apprehensive about being the bishop, "because I want to be myself.
"It's kind of a mixed feeling, excited but at the same time overwhelming," he said. "Now I belong to everybody."
He will be elevated to the rank of cardinal, a first for Tonga, by Pope Francis at a consistory at the Vatican Feb. 14.
Father Hurrell said he believes the message the pope is giving with this choice was that "the little ones matter."
The cardinal-designate is the current president of CEPAC, the Episcopal Conference of the Pacific. "He is very well-respected by his brother bishops," said Father Hurrell.
With only about 15,000 Catholics, the Diocese of Tonga is the size of some American parishes. At 53, Bishop Mafi will be the youngest of the 120-plus-member college of cardinals.
Tonga is a constitutional monarchy made up of 176 islands, of which about 50 are inhabited, spread across 270,000 square miles of ocean. The people speak Tongan and English.
The country lies about 3,000 miles southwest of Hawaii.
The country's prominent religion is Methodist; Catholics make up around 13 percent of the population.

Contributing to this story was Peter Grace in Auckland, New Zealand.