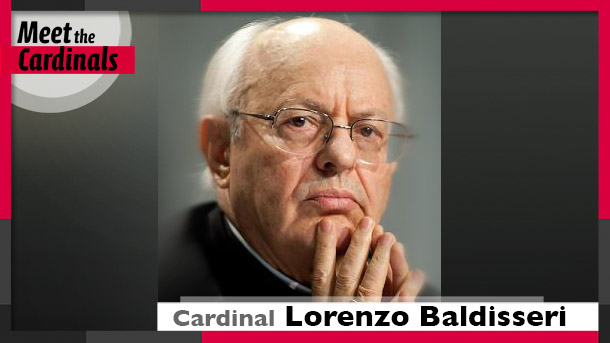 By Carol Glatz Catholic News Service VATICAN CITY (CNS) -- Even though Cardinal-designate Lorenzo Baldisseri will be elevated to the College of Cardinals during a formal ceremony Feb. 22, he already has a red cap from the pope. When then-Cardinal Jorge Bergoglio was elected pontiff March 13 by his fellow cardinals in the Sistine Chapel, then-Archbishop Baldisseri was serving as secretary of the conclave. In his role as secretary, the former papal diplomat was among the first people to greet and pledge allegiance to the new pope before the pontiff presented himself to the world waiting outside. "When I came before him, I knelt. And it was at that moment that the pope placed a hand upon my head and then eased onto it the red cardinal's zucchetto" that had belonged to the new pope, the cardinal-designate told Vatican Radio. He said the newly elected pope told him, "'You are a half-cardinal.'" It was reported that one of the cardinal electors had suggested the Argentine pope repeat what Blessed Pope John XXIII had done in 1958 and place his cardinal cap on the head of the secretary of the conclave after his election. And like Pope John, Pope Francis will officially elevate the secretary of the conclave that elected him at his first consistory creating new cardinals. The 73-year-old Italian cardinal-designate has been a part of some of Pope Francis' key preparatory meetings and discussions on the reform of the Roman Curia. He was part of a September meeting that included heads of the major Vatican offices and a meeting in October with the eight-member Council of Cardinals for discussion devoted to the reform the Synod of Bishops, which the cardinal-designate has headed as general secretary since 2013. Pope Francis appointed him to head the synod office in September and has suggested that he wants to make it into a permanent advisory body. The Synod of Bishops organizes periodic meetings of bishops from around the world to advise the pope on specific subjects, such as the upcoming extraordinary synod on the family in October. The cardinal-designate asked the world's bishops to distribute "as widely as possible" a preparatory document and questionnaire on how church teaching on marriage and the family is promoted, understood and accepted so the synod could get a more realistic snapshot of the situation and views and experiences of parishioners. Cardinal-designate Baldisseri's synod office was also involved in Pope Francis' first apostolic exhortation, "Evangelii Gaudium" ("The Joy of the Gospel"). The cardinal-designate told journalists in November that the pope took the suggestions made by the 2012 Synod of Bishops on new evangelization and "made them his own, re-elaborating them in a personal way" in order to come up with his document on mission and the new evangelization. The cardinal-designate has served the Vatican for 40 years -- mostly as a Vatican diplomat and heading the nunciatures in Brazil, Nepal and India, Paraguay and Haiti. He also served in Guatemala, Japan, France and Zimbabwe. He has had to face some difficult and challenging situations early in his diplomatic career. Before his first appointment as papal nuncio to Haiti in 1992, he was named charge d'affaires at the Haitian nunciature in 1991. He arrived nine days after rioting crowds burned down the Haitian bishops' conference headquarters, burned the Vatican nunciature and forced the papal nuncio, Archbishop Giuseppe Leanza, into the street and stripped him to his underpants. Political unrest and coup attempts continued for several years after the 1990 democratic election of a former Salesian priest, Jean-Bertrand Aristide. The cardinal-designate tried to play a mediating role when he was nuncio to Paraguay when political turmoil and violence broke out after the murder of Paraguayan Vice President Luis Maria Argana in 1999. He also served as nuncio in countries that prepared for and hosted a papal visit, such as India during Blessed Pope John Paul II's visit in 1999 and Brazil when Pope Benedict XVI visited in 2007. Cardinal-designate Baldisseri was born in Barga, Italy, and was ordained in 1963. He studied at the Vatican's school for training diplomats, the Pontifical Ecclesiastical Academy, and entered the Vatican diplomatic corps in 1973. He was made archbishop in 1992, serving as nuncio until 2012 when Pope Benedict appointed him secretary of the Congregation for Bishops. An accomplished pianist, he studied at an Italian conservatory near Florence as a young man and Rome's Pontifical Institute of Sacred Music. Pope Benedict invited him to play a private concert for the papal household at the papal villa of Castel Gandolfo in 2007. The same year the Italian cardinal-designate produced a CD of him playing classical compositions and gave the proceeds to charity.