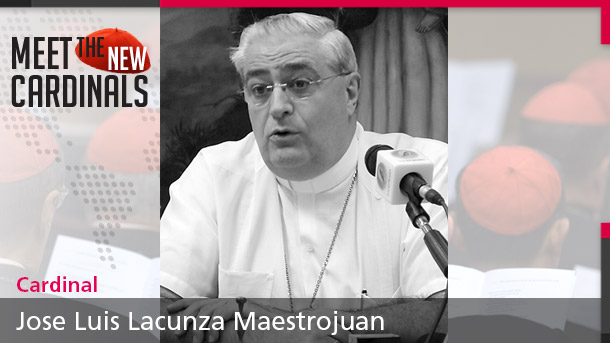 By David Agren Catholic News Service
MEXICO CITY (CNS) -- Cardinal-designate Jose Lacunza Maestrojuan of David, Panama, learned of his elevation to cardinal via his smartphone. His sister, living in Spain, sent him a short message via the instant messaging service WhatsApp asking, "You have nothing to tell me? The pope has made new announcements. This doesn't affect you?" the Spanish website teinteresa.es reported.
Cardinal-designate Lacunza confessed he considered the idea of being elevated to cardinal "crazy," though a congratulatory phone call from Nicaraguan Cardinal Leopoldo Brenes Solorzano of Managua made him think the message was no joke.
Like most of the 20 new cardinals Pope Francis named Jan. 4, the news of his elevation came as a surprise. And like many of the others who will be elevated into the College of CardinalsFeb. 14, he has worked in one of the world's more peripheral regions and focused heavily on social matters.
"He is recognized (in Panama) because he has been a bishop very close to and very sensitive to social subjects," said journalist Eunice Meneses, who works in the Archdiocese of Panama City. "He has been a mediator in conflicts."
The conflicts have included indigenous land issues, but also work on the promotion of democracy in Panama and denouncing the abuses of the late-1980s military dictatorship.
Cardinal-designate Lacunza, a member of the Augustinian Recollects, has led the Diocese of David, in an agricultural region in the west of Panama City near the border with Costa Rica, since 1999. There, he has mediated conflicts among indigenous groups trying to protect their traditional lands against activities such as mining.
He was awarded an honorary degree from a local university in a 2012 for his work mediating a dispute, which had turned violent, between the Ngabe-Bugle peoples and the government over mining concessions on indigenous reserves.
In accepting the honor, Cardinal-designate Lacunza said his mission was "to work among the poor, with the poorest, that is, the indigenous people of the Ngabe-Bugle region," according to the Augustinian Recollects' website. The people there, he added, "have been forgotten for years, and they need to have their basic problems resolved."
The cardinal-designate called the degree "an undeserved recognition for a person with so many faults and errors."
Cardinal-designate Lacunza was born in Pamplona, Spain, Feb. 24, 1944. He became a priest in 1969 and was sent to Panama by the Augustinian Recollects shortly thereafter. He became a citizen of Panama.
News of his elevation made national headlines in Panama, where an estimated 80 percent of the population identifies as Catholic, although that number has shrunk in recent years as Evangelical congregations gain converts.
Cardinal-designate Lacunza "has an extraordinary trajectory of service to Panama and the Catholic Church, so this good news is happily received in all the country," said President Juan Carlos Varela, the Panamanian newspaper La Prensa reported.
"In this designation, we see a sign of recognition for the work of the Catholic Church in our country," Archbishop Jose Ulloa Mendieta of Panama said in comments reported by La Prensa.
The economy of Panama has grown quickly in recent years as the Panama Canal is being expanded and investors pour money into the country. The situation has created prosperity for some, along with increasing social inequality, Meneses said.
"This is the grand problem of Panama today, and the church is sending a signal on this subject," she said.