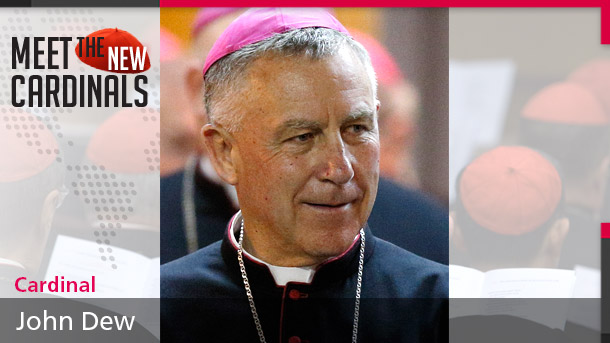 By Peter Grace Catholic News Service WELLINGTON, New Zealand (CNS) -- Cardinal-designate John Dew of Wellington has appealed for a more pastoral approach for some of the family issues facing New Zealand Catholics. At the 2005 Synod of Bishops on the Eucharist, he called on church leaders to discuss a "pastoral approach" to ending "the scandal of hunger for eucharistic food." He said the church would be enriched if dedicated Catholics excluded from the Eucharist because of church rules could return to the Lord's table. He also spoke of an increasing number of marriages between Catholics and members of other Christian faiths, in which the couple could not receive Communion together. During last October's Synod of Bishops on the family, he told Salt and Light Television that the New Zealand bishops want "to see language in church documents changed so that it's something that gives people hope and support and encouragement, rather than being something that appears to many people" as basically saying "they can't meet the mark, they can't live up to the standards the church is asking of them." When the bishops were preparing for the synod, they had a "huge" response, he said: "25 percent of the people responding were nonpracticing Catholics and the message was that 'It's impossible when we're told that because we're using contraceptives we're intrinsically evil or that we're living in an irregular situation -- the language is so negative that it doesn't help us.' "So, my intervention was: Let's not be concentrating on rules, but looking for language that helps people and encourages people in their journey toward God." Pope Francis announced Jan. 4 that the Wellington archbishop would be one of 20 new cardinals elevated at a consistory at the Vatican Feb. 14. In a statement, Cardinal-designate Dew said his appointment is recognition of the Catholic Church in Aotearoa, the Maori word for New Zealand, and the contribution it makes to the global Catholic family. He also said he was delighted to hear that Bishop Soane Mafi of Tonga also had been named. "Together it is not only great news for New Zealand and Tonga, but for the Oceania region," he said. "Although we are geographically far from much of the world, Pope Francis has gone to the periphery of the world to name new cardinals." New Zealand last had a cardinal eligible to vote at a papal conclave five years ago, until Cardinal Thomas Williams, retired archbishop of Wellington, turned 80. John Dew was born in Waipawa, a small settlement on the east coast of New Zealand's North Island, May 5, 1948. He attended Catholic schools through high school. He studied philosophy at Holy Name Seminary in Christchurch and theology at Holy Cross Seminary in Dunedin. He was ordained a priest in May 1976 and became auxiliary bishop of Wellington in May 1995. He was appointed coadjutor archbishop in 2004 and succeeded Cardinal Williams as archbishop the following year. In addition to participating in the synods on the Eucharist and family, in 2012 Pope Benedict named him to the Synod of Bishops on the new evangelization. He is president of the New Zealand Catholic Bishops Conference and heads the Military Ordinariate of New Zealand. In a 2013 interview with the Auckland-based NZ Catholic newspaper, Cardinal Oscar Rodriguez Maradiaga, president of Caritas Internationalis, said that during the March 2013 conclave there was a common feeling among the cardinals that the Vatican needed "internationalization." "We need more Oceania cardinals," he said in Wellington during a press conference with Catholic media. He said that Oceania is not Australia by itself, and the region has a wide variety of nations and peoples. Oceania then had only one cardinal -- Cardinal George Pell of Sydney, now at the Vatican -- able to be an elector during a conclave to elect a pope.