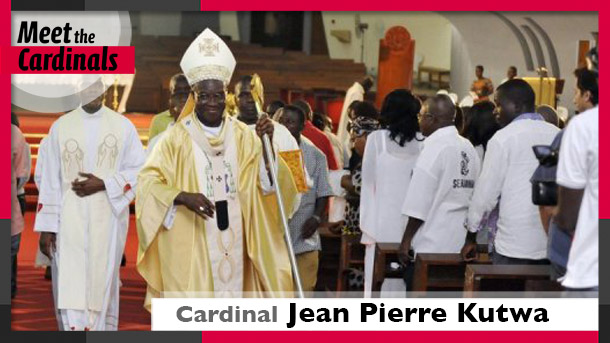 ABIDJAN, Ivory Coast (CNS) -- Ivory's Coast's new cardinal is confident his nomination will advance peace after a decade of conflict and instability in the French-speaking West African country.
"I ask God to give me the grace of strength, so I can work on the different personal encounters we've already begun and continue them until wounded hearts are finally healed," said Cardinal-designate Jean-Pierre Kutwa of Abidjan.
He spoke after Pope Francis announced Jan. 12 that he was among 19 prelates who will be elevated to the College of Cardinals in a consistory at the Vatican Feb. 22.
He told the Nord-Sud daily he viewed his nomination as a "sign of trust" by the pope for the Ivorian people and would use it to "serve the church and whole country" after its "years of crisis."
"What I'd like to combat precisely is the verbal violence of politicians," the 68-year-old archbishop added. "It isn't just the truth which matters, but the form in which it's proposed. If the truth isn't pronounced with good form, the person you speak it to will feel aggression and refuse what's offered."
The archbishop went into hiding in April 2011, when civil war erupted following President Laurent Gbagbo's refusal to accept defeat in November 2010 elections. More than 3,000 Ivorians were killed and 500,000 displaced as militias loyal to rival candidate Alassane Ouattara launched a rebellion and seized the country with backing from the United Nations and France, the former colonial power.
A Commission for Dialogue, Truth and Reconciliation planned to organize public meetings between victims and those accused of atrocities in the conflict, which followed earlier fighting in 2002-03. However, this has been hampered by lack of funding and accusations of government inaction, as well as sporadic violence by supporters of Gbagbo, who faces trial for crimes against humanity before the International Criminal Court in The Hague.
In an October homily at Abidjan's St. Paul Cathedral, Cardinal-designate Kutwa urged Catholics to confront political corruption and remember the church was "called to share with the poor and oppressed of every kind."
"Engagement for peace, justice, human rights and the promotion of the human person must be a preoccupation for all Christians," said the cardinal-designate, whose homily appears on his archdiocesan website.
"Deacons, priests and bishops are called to give witness to Christ, taking courageous and prophetic positions in the face of the corruption of political and economic power -- seeking neither glory nor material goods, but using what the church possesses for its service to the poorest," he said.
Born Dec. 22, 1945, at Blockhauss, near Abidjan, Jean-Pierre Kutwa was ordained in 1971 and appointed was bishop of Gagnoa in May 2001.
Named of archbishop of Abidjan in May 2006, he also serves as vice president of the Regional Episcopal Conferences of West Africa and is a noted music composer.