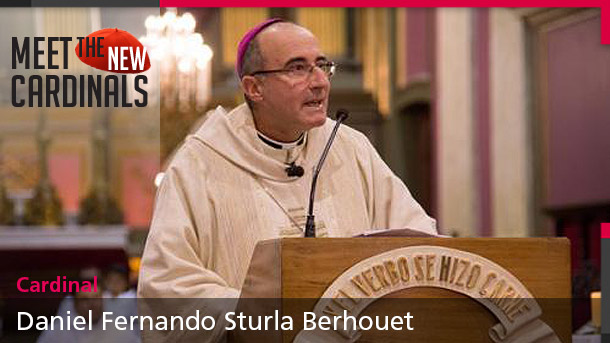 By David Agren Catholic News Service.
MEXICO CITY (CNS) -- Cardinal-designate Daniel Sturla Berhouet of Montevideo, Uruguay, was ministering in a working-class barrio when he learned of his elevation to cardinal -- circumstances not lost on Uruguayan church officials.
The Jan. 4 announcement that the archbishop was one of 20 men who would be elevated to cardinal Feb. 14 was "a sign in the direction pointed to by Pope Francis," Bishop Heriberto Bodeant Fernandez of Melo, Uruguay, told Catholic News Service in an email.
In neighboring Argentina, Pope Francis pointed the Archdiocese of Buenos Aires in a similar direction by putting his best priests in poor barrios and making those on the margins of society the center of his ministry.
Cardinal-designate Sturla, 55, has adopted a similar approach in Montevideo, capital of Uruguay. He sees young people falling away from the church as a challenge to correct, in what is already the least-Catholic country in Latin America and one moving in a socially liberal direction.
In comments provided by Bishop Bodeant, Cardinal-designate Sturla said after his elevation: "In Uruguay, we have to think what we can do so that this message (of the Gospel) gets to young people in the working-class barrios.
"This, for me, is priority No. 1."
The cardinal-designate has his work cut out for him. Only 46 percent of Uruguayans profess Catholicism, according to a government survey, compared with 76 percent in Argentina. Bishop Bodeant said Uruguay also has "a strongly secularized culture," evidenced by the approval in recent years of more liberal abortion laws, the legalization of same-sex marriages and the decriminalization of marijuana.
Bishop Bodeant said the cardinal-designate speculated he might have been named a cardinal to help the Catholic Church gain ground.
"Uruguay is not the poorest country in Latin America (but) the Uruguayan Catholic Church is the poorest in the region in its resources and quantity of people. Pope Francis knows this," Bishop Bodeant commented, citing what Cardinal-designate Sturla had said.
Cardinal-designate Sturla told the Uruguayan newspaper El Pais that introducing people to the Gospel is another priority, while changing perceptions of the church was a challenge, especially as the average prelate is shown no special reverence or respect and seen simply in Uruguay as "che cura," loosely translated as "priest dude."
Cardinal-designate Sturla was the youngest of five children in a church-going family. Both his parents died while he was a teenager.
He studied in a school run by the Brothers of the Holy Family and participated in the Jesuits' youth movement. In 1975, he was among the five Jesuits and 33 lay Catholics abducted by soldiers in Montevideo on Good Friday, according to an account from Italian journalist Nello Scavo in his book, "Bergoglio's List: Those Saved by Pope Francis; Stories Never Told."
Pope Francis, then Jesuit provincial for Argentina and Uruguay, managed to inform the Vatican, which sent telegrams to Uruguayan officials urging the captives be released.
In 1980, Cardinal-designate Sturla joined the Salesians of St. John Bosco and was ordained in 1987. The cardinal-designate has taught history and even authored a book: "Holy Week or Tourism? The secularization of the calendar in Uruguay."
The announcement he would be elevated to cardinal comes less than a year after he was appointed archbishop of Montevideo, a move Bishop Bodeant said came as a surprise.
It also came as Uruguay, a country of just 3.4 million people, was making headlines for decriminalizing marijuana.
In a newspaper interview in early 2014, the cardinal-designate said, "I do not have a fully formed opinion."
"I think that those promoting the law have the good intention of curbing drug trafficking," he told El Pais. "The law that was approved has faults" -- such as the state possibly controlling the production and distribution of marijuana -- "but I understand that we have to find ways to save young people from drugs."
He also expressed opposition to approval of abortion and same-sex marriages, but called for the church to "look ahead" because laws on both issues were "already approved."
"The important thing is that the church goes out and cures the injured of society, that it continues defending the life of the unborn," he said.