Meet the Cardinals: Beniamino Stella - Congregation for the Clergy 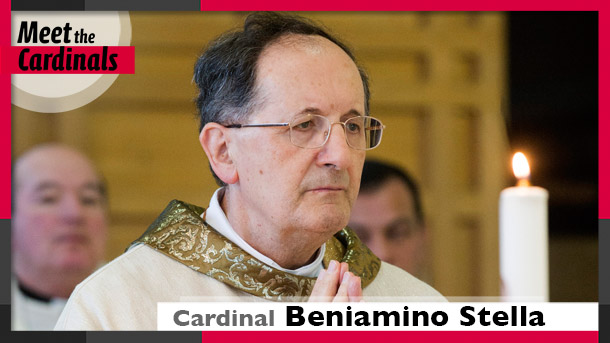 By Carol Glatz Catholic News Service
VATICAN CITY (CNS) -- When Cardinal-designate Beniamino Stella joins the College of Cardinals Feb. 22, he will bring with him decades of experience working in developing nations and handling highly-charged situations of conflict.
Twenty years working as a papal nuncio and six years serving as head of the academy that trains Vatican diplomats have given him a deep understanding of the unique balance a priest-diplomat must maintain between the pastoral and political.
Vatican diplomats must be men of prayer who exhibit prudence, balance, discernment and a strong "sense of adherence to the church of Christ and to the pope, whom they are called to serve," he told the Vatican newspaper last year, while still president of the Pontifical Ecclesiastical Academy, a position he held from 2007 to 2013.
Understanding political, economic and cultural realities around the world is important, but the top quality of a Vatican diplomat always must be "a solid priestly identity," he told the newspaper in January 2013.
In September, Pope Francis chose the 72-year-old Italian cardinal-designate to be the new head of the Vatican Congregation for Clergy -- the office responsible for the formation, ministry and life of priests and deacons.
Born Aug. 18, 1941, in Pieve di Soligo in the northern Italian province of Treviso, Cardinal-designate Stella was one of 12 brothers and sisters, all of whom are still alive. After receiving degrees in philosophy and theology at Rome's major seminary, he was ordained in 1966.
He later studied canon law at the Pontifical Lateran University and completed studies at the Pontifical Ecclesiastical Academy.
He joined the Vatican diplomatic corps in 1970 and worked at the papal nunciatures in the Dominican Republic, the Democratic Republic of Congo and Malta as well as at the Vatican Secretariat of State.
He was named an archbishop and nuncio in 1987 and served as pro-nuncio to the Republic of the Congo. He was also the papal representative in the Central African Republic and Chad.
In 1992, Blessed John Paul II assigned him to head the nunciature in Cuba -- where, just six years later, the Polish pope would make history by becoming the first pope to visit the island nation.
In Cuba, Cardinal-designate Stella had to navigate growing tensions in church-state relations and immediately start building dialogue with the Communist government in the hopes of creating greater church-state cooperation.
One year after the pope's historic 1998 visit, Blessed John Paul named him nuncio to Colombia at a time when the Latin American nation was experiencing increased human rights violations with a growing guerilla insurgency and increased paramilitary violence.
The cardinal-designate took an active role in negotiating with guerillas for the return of kidnapped religious, including Bishop Jose de Jesus Quintero Diaz of Tibu in 1999.
He said, at the time, that he was working not only for the bishop's release but for "a comprehensive approach to the whole conflict."
During his tenure in Colombia, which lasted until Pope Benedict XVI named him head of the diplomatic academy in 2007, he continued supporting the local church's efforts to act as a channel for dialogue between the government and left- and right-wing groups; help negotiate peace deals; and guarantee the release of civilian hostages during Colombia's ongoing five-decade-long civil war.
---
(CNS photo/Giancarlo Giuliani, Catholic Press Photo)