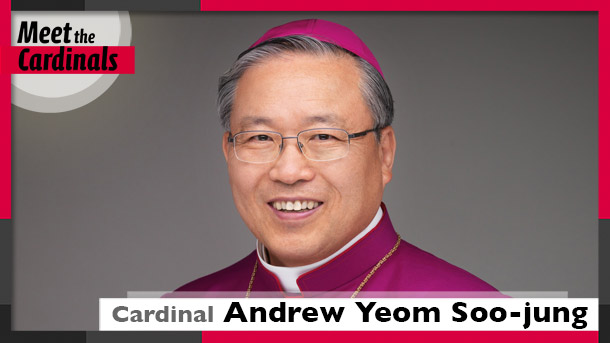 SEOUL, South Korea (CNS) -- When a cardinal dons his red robes for the first time and is given his red hat, he usually is reminded that the color of the vestments is a call to devote himself completely to Christ and his church, even to the point of shedding his blood if necessary.
For 70-year-old Cardinal-designate Andrew Yeom Soo-jung of Seoul, such sacrifice is part of his family history as well as the history of Catholicism in his country.
He is a direct descendant of Joseph Yeom Deok-sun, who was among the first Koreans to embrace Catholicism in the late 1700s. Another direct ancestor, Peter Yeom Seok-tae, died in 1850 during the anti-Catholic persecutions of the Joseon or Choson dynasty.
Pope Francis will induct the Korean archbishop and 18 other men into the College of Cardinals Feb. 22.
As part of the 2012-13 Year of Faith, the cardinal led Seoul priests on a walking pilgrimage to churches and shrines connected to the story of the Korean martyrs; 103 martyrs have already been canonized and another 125 should be beatified this year.
The Seoul pilgrimage also marked the 60th anniversary of the Korean War and a time of prayer for reconciliation between North and South Korea. The cardinal-designate is the apostolic administrator of the North Korean Diocese of Pyongyang, a diocese that exists only in name since the country is officially atheist.
Visiting a shelter run by Caritas Seoul Jan. 19, just a week after Pope Francis announced he was making him a cardinal, Cardinal-designate Yeom told the sick and the homeless: "From now on, I will be wearing scarlet garments. The blood-like color symbolizes martyrdom, my willingness to die for faith. I need your prayers. Your prayers are strong, because they are made under difficult circumstances."
In an interview with Fides, the news agency of the Congregation for the Evangelization of Peoples, the cardinal-designate said he saw his appointment to the College of Cardinals as a further encouragement to be bold in proclaiming the Gospel throughout Asia.
"I have to admit I am a bit afraid and worried, but I accept with humility and with joy the Holy Father's invitation and the Lord's call," he told Fides. "I would like to be a gentle shepherd who cares for every lamb of the flock, capable of holding together the whole flock."
Born Dec. 5, 1943, in Ansong, he studied at the Seoul seminary before earning a master's degree in counseling psychology from Korea University.
Ordained to the priesthood in 1970, he spent most of the first years of his ministry working in parishes and teaching at the Seoul archdiocesan minor seminary. He became chancellor of the major seminary in 1987 and chancellor of the archdiocese in 1992.
In 2001, Pope John Paul II named him an auxiliary bishop of Seoul, and he became head of the archdiocese in 2012. Among other posts within the Korean bishops' conference, he serves on the Commissions for the Reconciliation of the Korean People and the Special Commission for Promoting Beatifications and Canonizations.