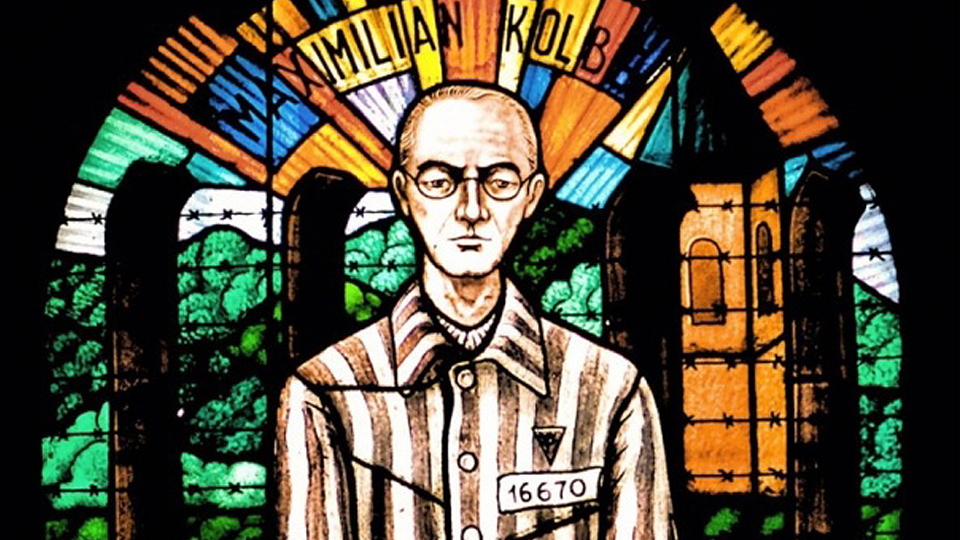 As we look back on the events surrounding the Second World War, a time in our history filled with courage, unprecedented human devastation, noble action, and unimaginable suffering, no single event, in my mind, could be considered more blatantly hateful, inhuman and evil than the systematic efforts of the Nazi regime to annihilate the Jewish and the Slavic peoples. It was not long after this annihilation began, that the Nazis extended their efforts to include defiant politicians, educators, and eventually those Christians who, in faith, renounced the new world-order proposed by the Third Reich. Among the over five million Christians sent to die in these camps was Franciscan Friar Maximilian Kolbe. Named a Saint and Martyr by Pope John Paul II on the 10th of October 1982, Kolbe joins the communion of saints as a model of self-sacrifice, as the patron of political prisoners and as a living testimony to the shining light of Jesus Christ amidst the darkest moments of human history. Born on January 8th, 1894, as the second son of Julius Kolbe and Marianne Darowska, he was baptised Raymond, and dedicated by his parents to the Virgin Mary. Being poor, and living in Poland at a time when the country was occupied by the Russian Empire, both parents worked very hard to provide for their family. Hoping for the better life that political freedom would provide, Kolbe’s father enlisted to fight for Polish independence in 1914, and it was then that he first witnessed the brutality of war, as his father was hung as a sign of Russian dominance. It was around that time that Kolbe had his first mystical encounter with Mary. In his private journal he wrote that, as a child

“. . . I asked the Mother of God what was to become of me. She then came to me holding two crowns, one that was white, the other red. She asked if I was willing to accept either of these two crowns. The white one meant that I should persevere in purity, and the red that I should become a martyr. I said that I would accept them both.”

At the age of sixteen, he entered the novitiate of the Conventual Franciscan Order and at his first vows one year later, took the name Maximilian. After years of study at both the Gregorian University and the Franciscan Collegio Serafico in Rome, Kolbe was ordained and granted a doctorate in theology for his ground-breaking work on the Blessed Virgin Mary – a study that would later influence the Second Vatican Council.

He then returned to Poland in 1919, to teach history at the seminary in Crakow, where he remained until 1927. During these years the Friar suffered regularly from bouts of tuberculosis and poor health. This did not stop him, however, from teaching and from founding a popular magazine entitled Knights of the Immaculata. By 1927 the magazine, created to confront religious apathy, had a press run of some 70,000 issues, and their friary could no longer house its publishing works. With the help of a Polish prince, Kolbe acquired a large piece of land and founded a new monastery and large printing centre. From there, the Knights of the Immaculata continued to grow, finding its way to over 750,000 homes each week. Not content with his work in Poland, Kolbe left with four friars for Japan in 1930. Penniless and unable to speak Japanese, within one month the Franciscans were printing a Japanese version of the Knights, and by 1936, the weekly circulation grew to some 65,000 copies. While in Japan, Kolbe also founded a monastery and travelled throughout India. By 1936, however, poor health forced him to curtail his missionary work, and to return to his monastery in Poland. Ironically, the Friar returned only to face the greatest challenge of his life with the Nazi invasion of Poland. Soon after their arrival, he was arrested by Nazi forces – simply for being a religious leader – and held for several months, while many of his community members were exiled. Upon his release, Kolbe continued to publish the Knights, but now, rather than religious apathy, the Franciscan challenged the new Nazi regime. The German governor responded by shutting down the press, suppressing the congregation, dispersing the brothers, and imprisoning Kolbe. On May 28th, 1941, he was transferred to Auschwitz and branded as prisoner 16670. Kolbe was assigned to a special work group staffed by priests and supervised by particularly brutal guards. His calm dedication to the faith only brought him the worst jobs available, and harsh beatings. At one point Kolbe is said to have been beaten, lashed, and left for dead if some prisoners had not managed to smuggle him into the camp hospital where he spent his recovery time hearing confessions. In July, 1941, there was a botched escape from the camp. In retaliation, the guards ordered that ten men be shot for each prisoner that escaped. Among the chosen was a young man named Francis. Kolbe, knowing that Francis was married and that he had a young child, volunteered to take his place. Escorted to a lab and injected with a form of poison, the Friar suffered a painful death, so that another might live. As a saint, Maximilian Kolbe not only stands among the blessed in heaven praying for our world, but his life story also remains here, with us, as a powerful witness of service. Despite, the loss of his father, his own poor health, the forces of religious apathy around him, and the Nazi regime, Kolbe spent his life focussed on serving others out of love for Jesus Christ and Mary, his mother. A theologian, a great communicator, a generous labourer, a prisoner, Kolbe died at Auschwitz as he had always lived, serving others and giving all that he had for love of God and neighbour. This reflection comes to us from Fr. Michael Knox, SJ, a Jesuit priest who has appeared previously on Salt and Light. Today, August 14th, is the feast of St. Maximilian Kolbe and the 72nd anniversary of his death.