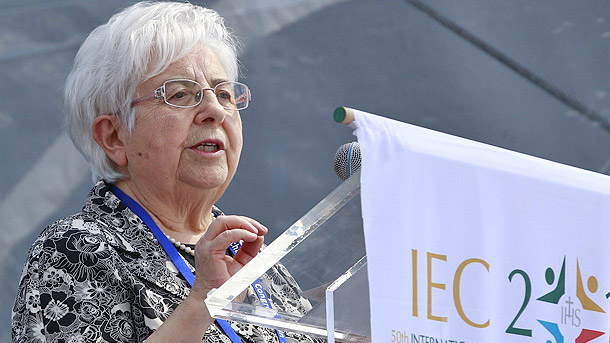 Below is the full text of the catechesis by Maria Voce, leader of the Focolare Movement, as delivered on Day 2 of the 2012 International Eucharistic Congress in Dublin, Ireland.

Communion in one Baptism
Ten years ago I visited Ireland for the first time. I came to be with a dear friend, Lieta Betoño, who was dying. She was from Argentina and had spent thirty years of her life in Ireland in the Focolare community. I had often heard her speak of the warm welcome she had received in this country. During my brief visit here, I too, as well admiring the wonderful rainbows, enjoyed the warm family spirit in the communties I met.
I find the same spirit here among you and it is a joy to be here for this International Eucharistic Congress. I have been asked to share a short testimony on the topic of “Communion in one Baptism”.
Baptism is the sacrament that links all Christians. It is the sacramental bond of unity.