March's Lectio Divina asks us to reflect on time and talents

In this month's edition of Lectio Divina, Toronto's Archbishop suggests that "we don't have lots of time."  Instead of making us panic though, Archbishop Thomas Collins says that the shortness of this life should be a source of joy, not fear. “The return of the master is not long off for many of us,” he said,but added “we should not be afraid. If I am loving God and my neighbor, I will anticipate His coming.” 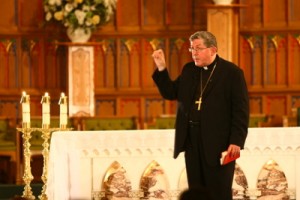 In focusing on Matthew’s parable of the three servants and the talents (Matthew 25:14-30), the Archbishop emphasized that this parable is primarily about stewardship. The word ‘talent’ in the context of this parable refers to an enormous sum of money. From there, the word evolved into the more modern interpretation of talents as being something non-material but perhaps just as valuable. For the readers of the age, talents would have been worth an inconceivable amount and, as Archbishop Collins reflected, burying the treasure (as did the third slave) would have been a realistic option for fear of its being lost or stolen. As you can see, even with the shifting of literal meaning, the metaphor is preserved. How many of us are so fearful of letting God’s gifts made known that we would rather bury what has been entrusted than invest it in even the smallest, most effortless way? The sin of the third servant, however, was not in his paralysis alone but in his detachment from reality. The third servant, Archbishop Collins says, was “tragically caught in illusion”. He did not know the Master. His distorted perception of the Master as a “harsh man, reaping where [he] did not sow and gathering where [he] did not scatter seed” kept him in darkness and led to his eventual demise. He was unable to see the goodness of the Master. This is why, the Archbishop concluded, we must pray from our hearts when we beseech the Lord at Mass: “In your Mercy Lord, keep us free from sin” and “may we wait in joyful hope for the coming of our Savior Jesus Christ”. May we be found ready and in the light of His Truth when He comes to settle accounts with us. Join us for March's edition of Lectio Divina with Archbishop Thomas Collins: The Parables of Jesus, Sunday, March 21st at 8:30pm ET with an encore presentation Wednesday, March 24th at 8pm ET.