March for Life 2009 in Ottawa this Thursday 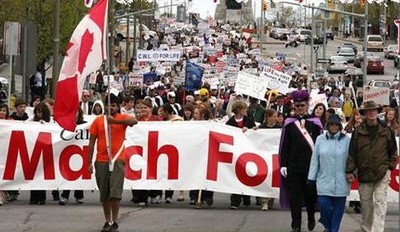 Later this week I will have the great privilege of co-hosting (along with Mary Rose Bacani) Salt + Light Television’s coverage of the March for Life in Ottawa. Thousands of Pro-Life Canadians will be arriving in the nation's capital to defend the most basic of all human rights: the right to life. While some would like you to think this is a small group of radical extremists the numbers tell a far different story. A recent Environics poll found that although Canada remains, regretfully, the only country in the developed word with no legal limits on abortion throughout all nine months of pregnancy, nearly 6 in 10 respondents support legal protection for unborn children at some point before birth. Only 33% support the current situation of protection only after birth. In Canada, almost all abortions are paid for by taxpayer money -- estimated at more than $80 million a year. This means the majority of Canadians are paying millions of dollars to support a morally reprehensible action that they oppose. These realities make this year’s March for Life all the more urgent. I hope you will consider making the trip to Parliament Hill on Thursday, May 14th, or tune into Salt + Light Television for coverage of the speeches, March and Rally later this month. Stay tuned to our programming guide for the broadcast times of the 2009 March for Life!