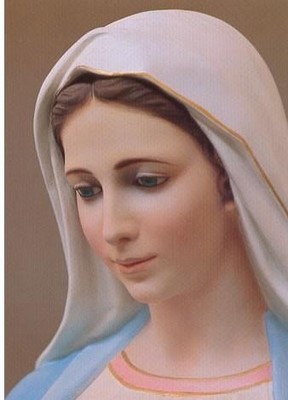 If a tree falls in the forest and nobody hears, did it really fall? We all know the answer to that one.
Let's take that concept, (okay, maybe stretch it just a wee bit for illustrative purposes) and look at Medjugorie. If an apparition happens, a devotion develops surrounding that apparition, and people are converted and nourished through that devotion but the priest who advised the visionaries gets sanctioned by the Congregation for the Doctrine of the Faith more than 20 years later, did the apparitions happen? Is the devotion legitimate and acceptable? That's the question that needs to be asked today.In Friday's Zoomcast I ran a story about Fr. Tomislav Vlasic, the Franciscan Minor friar who was instrumental in getting the word out about the apparitions at Medjugorie and served as spiritual director to the teenagers receiving the visions. It seems after the visions at Medjugorie became public knowledge, it also became public knowledge that the priest had comported himself in a very unpriestly manner. He moved to Italy and started a new community, without anyone's approval it seems. This past January the Congregation for the Doctrine of the Faith, Pope Benedict's former department, issued, essentialy, a cease-and-desist order. The degree ordered Fr. Vlasic to cut off contact with his lay community, stop appearing in public, stop hearing confessions, and go back to a Fransiscan monastery in Italy. Fr. Vlasic didn't do any of that.Various articles I read Friday morning say Fr. Vlasic instead threw himself into his work with zeal, making public appearances, inaugurating buildings, and all sorts of other things the went against the cease and desist order. The Congregation had no choice but to ask the Bishop of Vlasic's diocese, Mostar-Dunov, the diocese in which Medjugorie is located, to inform the faithful about Fr. Vlasic's current state.Sad, but unfortunatley these things happen.However, in this case Fr. Vlasic is not just any old parish priest. He is the priest who helped spread the word about the apparitions at Medjugorie. This decree from the Congration is meant to reprimand Fr. Vlasic for his personal behaviours that have go against his duties of obedience to his Fransiscan superiors, his obligations as a priest. However, if the headlines in England's Daily Mail and others are any indication, many people are quick to assume that the disciplining of Fr. Vlasic is a commentary on the validity of the Medjugorian apparitions and the devotion to the Madonna of Medjugoria.From a journalistic point of view, this is disheartening. The decree from the Congregation for the Doctrine of the faith doesn't mention the Medjugorian apparitions, nor does the letter posted by the Bishop of Mostar-Dunov.It does naturally raise questions in people's minds about Medjugorie. If the Vatican does at some point in future take a stance against the validity of these apparitions, what do we make then of the conversions inspired by people's experiences as pilgrims to Medjugorie? What do we make of the devotion to Our Lady that has been inspired through these apparitions? More importantly, can the faithful, can the public (and journalists!) really take a position on the validity of the alleged Medjugorian apparitions and everything that comes with it, based on the behavior of one man?If the Vatican won't do it, I'm not ready to do it either.-Click HERE for the letter from Bishop Ratko Peri? of Mostar-Dunov Diocese, on the Canonical status of Rev. Father Tomislav Vlaši?, OFM.