While many dioceses in Canada celebrate their Chrism Mass at the beginning of Holy Week, in Rome the Mass which has the blessing of the holy oils is held the morning of Holy Thursday. 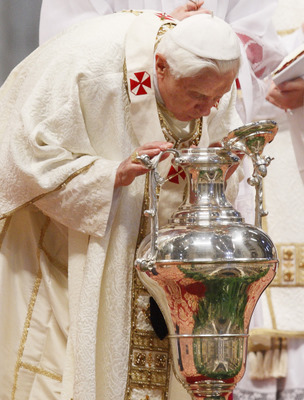 During this morning's Mass, the Holy Father offered a reflection on the significance of the three oils: "the oil for anointing catechumens, the oil for anointing the sick, and the chrism for the great sacraments that confer the Holy Spirit: confirmation, priestly ordination, episcopal ordination." While speaking of the oil for catechumens, the Pontiff said it is the first way of "being touched by Christ and by his Spirit." He explained that this oil tells us that it is not just us seeking God, but that "God himself is searching for us."

Do I want to recognize him? Do I want to be known by him, found by him? God loves us. He comes to meet the unrest of our hearts, the unrest of our questioning and seeking, with the unrest of his own heart, which leads him to accomplish the ultimate for us. That restlessness for God, that journeying towards him, so as to know and love him better, must not be extinguished in us. In this sense we should always remain catechumens.

The Pope went on to say that as Christians, we "should make the living God visible to the world" and lead people to him:

Are we truly God’s shrine in and for the world? Do we open up the pathway to God for others or do we rather conceal it? Have not we – the people of God – become to a large extent a people of unbelief and distance from God? Is it perhaps the case that the West, the heartlands of Christianity, are tired of their faith, bored by their history and culture, and no longer wish to know faith in Jesus Christ? We have reason to cry out at this time to God: “Do not allow us to become a ‘non-people’! Make us recognize you again! Truly, you have anointed us with your love, you have poured out your Holy Spirit upon us. Grant that the power of your Spirit may become newly effective in us, so that we may bear joyful witness to your message!

The Holy Father also noted that there are many "radiant examples of faith" in the world. He pointed to Pope John Paul II as one such example as well as the many people he beatified and canonized. See Pope Benedict's full Chrism Mass homily below:

CHRISM MASS HOMILY OF HIS HOLINESS BENEDICT XVI Saint Peter's Basilica Holy Thursday, 21 April 2011 Dear Brothers and Sisters, At the heart of this morning’s liturgy is the blessing of the holy oils – the oil for anointing catechumens, the oil for anointing the sick, and the chrism for the great sacraments that confer the Holy Spirit: confirmation, priestly ordination, episcopal ordination. In the sacraments the Lord touches us through the elements of creation. The unity between creation and redemption is made visible. The sacraments are an expression of the physicality of our faith, which embraces the whole person, body and soul. Bread and wine are fruits of the earth and work of human hands. The Lord chose them to be bearers of his presence. Oil is the symbol of the Holy Spirit and at the same time it points us towards Christ: the word “Christ” (Messiah) means “the anointed one”. The humanity of Jesus, by virtue of the Son’s union with the Father, is brought into communion with the Holy Spirit and is thus “anointed” in a unique way, penetrated by the Holy Spirit. What happened symbolically to the kings and priests of the Old Testament when they were instituted into their ministry by the anointing with oil, takes place in Jesus in all its reality: his humanity is penetrated by the power of the Holy Spirit. He opens our humanity for the gift of the Holy Spirit. The more we are united to Christ, the more we are filled with his Spirit, with the Holy Spirit. We are called “Christians”: “anointed ones” – people who belong to Christ and hence have a share in his anointing, being touched by his Spirit. I wish not merely to be called Christian, but also to be Christian, said Saint Ignatius of Antioch. Let us allow these holy oils, which are consecrated at this time, to remind us of the task that is implicit in the word “Christian”, let us pray that, increasingly, we may not only be called Christian but may actually be such. Continue reading

CNS photo/Paul Haring: Pope Benedict XVI breathes over chrism oil, a gesture symbolizing the infusion of the Holy Spirit, during the 2010 Chrism Mass.