Just a 30 minute train ride from Madrid, in the region of Castilla - La Mancha, lies Toledo. Today it' a small town with medieval roots and a whole host of inhabitants who commute to work in Madrid every day on the high speed AVE train. In it's bricks however, one glimpses the days when Toledo was the capital of Spain and place where the Christian, Jewish and Muslim cultures of Spain met and lived side by side. 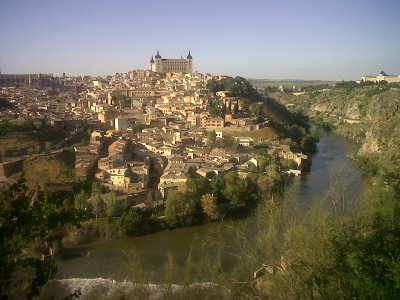 The town is surrounded on one side by medieval fortress wall, and on the other by a Tajo River. This position made it a natural choice as the nation's capital - it had natural protection from invasion...at least that was the theory. The Mozarabic style visible throughout Toledo testifies that over time different groups did invade the city, each leaving their own mark. Winding through the narrow cobble streets one stumbles upon a a mosque, a synagogue and several churches. Among the most notable churches is the Cathedral of Toledo, where Mass is celebrated in the Mozarabic rite every Sunday, and the Church of Saint John of the Kings (San Juan de los Reyes). Mozarab is a term that refers to the Christians who lived under Arab rule in Spain. As a result of the cohabitation the Latin Rite Mass celebrated by Christians absorbed esthetic elements from the Arabic culture. Saint John of the Kings Church was commissioned in 1476 by Queen Isabella I and Ferdinand II, also known as "The Catholic Monarchs" because they effectively united Spain into one Christian kingdom. The facade of the church is decorated with links of chain - the chains used to to imprison Christians who were held captive by the Moors. Isabella I ordered the chains hung on the facade of the church to commemorate the Christians who suffered and as a reminder that Spain was now under Christian rule. Approximately nine thousand pilgrims are expected to spend Days in the Dioceses in Toledo, including over 100 Canadians, almost 400 youth from the USA and 110 Australian pilgrims.