Madrid: Through the Gates

When Pope Benedict arrives in Madrid on August 18 one of the first things he will do is visit two of the most iconic places in the city...and, of course, meet with the more than one million young people who will be in town to see him. 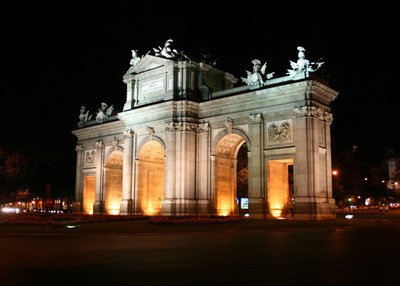 The Holy Father is expected to arrive at Puerta de Alcala' or Alcala Gate. The gate was built at the point where two central roads, the road from Aragon and the road from Catalonia enter Madrid. There are other gates in other parts of the city. Unlike nearby Avila, which was once a walled city and thus had gates so citizens could get in and out, Madrid's gates are purely decorative and mark the place where important roadways enter the city. The Puerta de Alcala that pilgrims will see when they arrive in Madrid in August is not the original gate. The original Puerta de Alcala was a modest affair, made of brick and consisting of three arches. The central arch housed a statue of Our Lady of Mercy while the side arches housed a statue of St. Peter Nolasco and Blessed Mariana of Jesus. That gate was demolished when construction began on the Salon del Prado (a pedestrian boulevard and green space that serves as a outdoor living space where Madrilenians walk, sit, chat, play, run) in 1764 and it was decided that the neighbourhood should match the architecture of the new space. Thus the larger, neo-classical gate was built. Today the Salon del Prado is known as the Paseo del Prado and extends north to the Paseo de Recoletos and the Paseo della Castellana. Pope Benedict will walk through the Puerta de Alcala accompanied by five young people who represent the five continents (in Europe, North and South America are considered one continent) and proceed to Plaza Cibeles, one of the most iconic plazas in Madrid located along the Paseo de Recoletos....but I'll save Cibeles for another day.