Did you know that Madrid was not originally the capital of Spain? Toledo was the home of the royal court and thus the capital city. It was in 1561 when Phillip II moved the royal court to Madrid, making it the capital. With that move, new buildings were commissioned so that Madrid would have everything a capital city needed. One thing was missing though – a cathedral. Madrid was still considered part of the dioceses of Toledo and as such did got have its own cathedral. 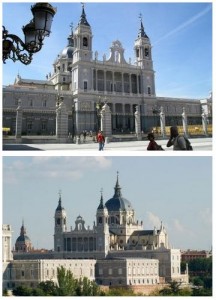 In fact, it was until only in 1883 that King Alfonso XII laid the first stone of the new cathedral. John Paul II consecrated it in 1993. Even so, Madrid was a diocese within the ecclesiastical province of Toledo. It was only in 1971 that the Archdiocese of Madrid–Alcala' was created. The Archdiocese of Madrid as we know it today was only created in 1991 when Alcala' was given its own diocese. Today's Cathedral of Our Lady of Almudena stands on the site of what was a granary when the city was under Morrish rule and, later, a small church. The Arab word for that location was “almud” or “almudith”, hence the church that was built there was called the church “of almudena”. Legend has it that when St. James came to Spain from Jerusalem, he placed a statue of Our Lady in this little church and over time it disappeared. After the reconquering of Madrid in 1085, King Alfonso VI decided to find that statue hidden by St. James. The king organized a procession along the fortress walls of Madrid asking God to reveal the hidden statue. As the procession was passing before a stretch of wall belonging to the former Arab granary, some rocks came tumbling down off the wall revealing a hollow space in the wall. In that hollow niche was the statue of the dark skinned Virgin, with two candles on either side that were still lit. From that day onward, Our Lady of Almudena was considered to be the patroness of Madrid. That day was November 9th and every year on that day the faithful of Madrid celebrate their patroness with a procession through the city centre. It is in this cathedral that Pope Benedict XVI will meet with seminarians during World Youth Day.