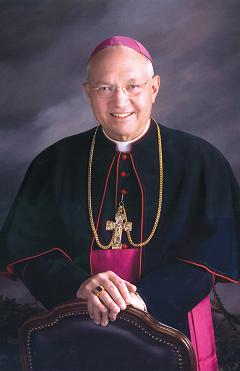 Bishop Robert Morlino has defended the public funeral of the late Senator Edward Kennedy as “more than appropriate”. As one of the first prelates to comment on the televised funeral mass and burial, the Madison, NY bishop described the rites as being intentionally “subdued” because of Kennedy's “long-standing and public holding of pro-abortion and other stances”. The bishop emphasized that the Church did not deny any of the Senator's personal or political failings in the liturgies.
“For not a few Catholics,” the bishop wrote in his diocesan newspaper column, “the funeral rites for Senator Kennedy were a source of scandal — that is, quite literally, led them into sin.” Bishop Morlino explained that some Catholics were taking satisfaction in their conviction that Kennedy was hell-bound, suggesting that the faithful should consider "whether we are less eager to grant mercy than God Himself is.” Read Bishop Morlino's letter below:

God’s mercy and Senator Edward Kennedy By Bishop Robert C. Morlino Thursday, 03 September 2009 Dear Friends, As I complete my time of rest and recuperation, I found myself unpredictably (at least had I been able to predict six months ago) with time available to me to watch on the television most of the events surrounding the funeral and burial of Senator Edward Moore Kennedy. For myself, the time was prayerful and well spent because I knew a lot about Senator Kennedy when he was still fairly young and, of course, I was younger still. Senator Kennedy and I, many years ago, were, according to the common understanding, not quite ready to get in line to go and meet our Judge. There was plenty of time available, we presumed, to prepare ourselves to take our place in that line, and to welcome that part of our humanity which is experiencing the mystery of suffering and death. As I watched Senator Kennedy’s funeral, it became very real to me that not only am I and so many of my friends very much a part of that line right now, getting ready to meet our maker, but we’re rather soberingly close to the front of that line. As I speak in this way, I don’t want anyone to think that I am indirectly referring to some medical crisis that brings me close to death — there is no such crisis. At the same time, realizing that one is much closer to the front of that line challenges me to intensify my efforts to grow in holiness and to be evermore alive through the mercy and forgiveness of God. And for that, I am grateful for the experience of last weekend. Read more...