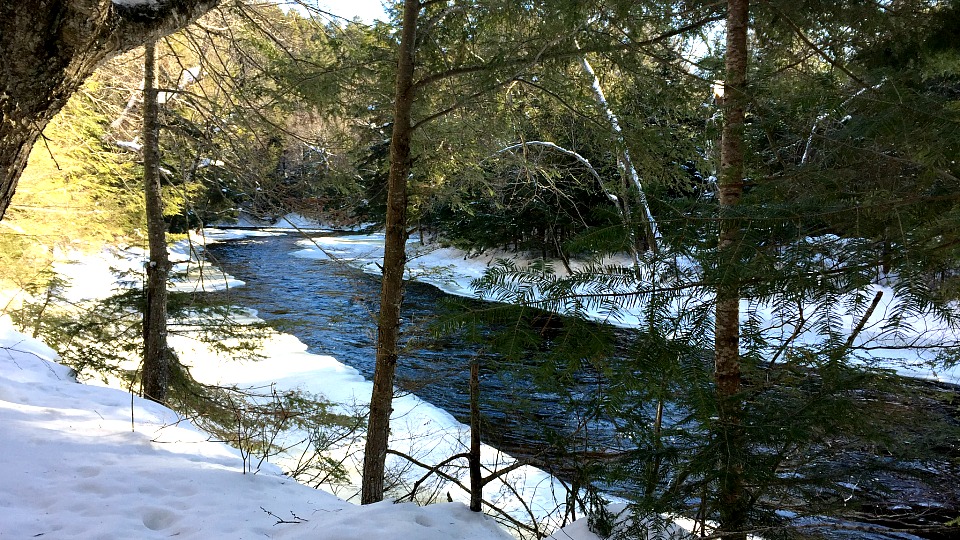 It can be difficult to get through winter in the city, especially when it seems all color has been sucked out of the landscape. Grey skies, iced-over trees, wet and muddy sidewalks, black coats, black boots, black, black, black, grey, grey, grey… these are not what dreams are made of. And, on the rare occasion when the sun does make an appearance, it remains for only a few hours before disappearing again, leaving us wondering if it’s ever going to come back and if this is all there is to winter! Despite this bleak depiction of a season thrust upon us each year – as all of them are, we would just rather this one not be thrown in the mix – winter still remains one of my favorite seasons. You read that correctly. A few weeks ago I ventured off into the cold Canadian wilderness. (And by wilderness I mean snowshoeing in Algonquin Park and sleeping in a heated cabin.) On our last day there, we set out (with our snowshoes) on the hunt for a waterfall. The trail, which curved along a river, was pristine. The snow - white, glistening and untouched. The sky - a crisp blue. And all of it illuminated by the morning sun. The beauty of the landscape was truly overwhelming. As we found ourselves “alone” in nature at that moment, it seemed my little heart could not contain all of the beauty set out before my eyes. 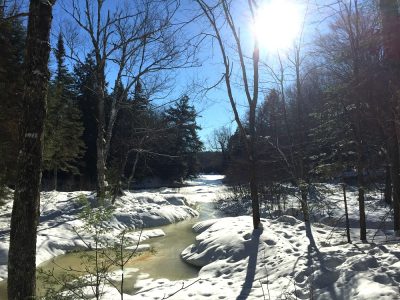 This experience of natural beauty brought with it an abundance of joy, peace and hope. John Paul II would say that “beauty is a key to the mystery and a call to transcendence. It is an invitation to savour life and to dream of the future. That is why the beauty of created things can never fully satisfy.” It stirs a “hidden nostalgia” for God (Letter to artists, 26, JPII). The Art Gallery of Ontario (Toronto) curator, Katharine Lochnan, would term such an experience of the landscape as “mystical,” an ability to see through reality to something greater than ourselves. From her own experience of beauty in the landscape came the idea of curating an exhibition on that very theme called, “Mystical Landscapes: Masterpieces from Monet, Van Gogh and More.” The exhibition, which began last November and ended in February, pulled together over 90 works of art between 1880 and 1930 from 37 artists including Canadian artists such as Emily Carr, Lawren Harris and Tom Thompson. It was broken down into various themes: The Life Journey and the Mystic Way, Monet and Spiritual Enlightenment, Landscape and the Dark Night of the Soul, the Cosmos and Mystical Experience. All of the artists featured lived in a time when life as people knew it was shifting: cities were becoming more and more industrialized, families were moving away from rural areas and organized religion was no longer the only place people sought out the sacred and the divine, if they sought it out at all. Something changed the way people were relating to the world – to creation and to others - around them. For many artists between the end of the 19th century and the beginning of the 20th, the landscape offered not only a means of escaping the dreariness of everyday living, but also of seeking out that “something more” or “something greater.” The artist could find in the landscape forms and shapes capable of expressing the inner going-ons of his soul. 19th century French art critic Albert Aurier once said, “Mysticism is what we need today; only mysticism can save our society from brutalization, sensualism and utilitarianism. The noblest faculties of our soul are atrophying… We must react.” I find his words to be relevant today, especially in a time when our own world is constantly shifting, or when jobs and relationships and past times fall short of what our hearts truly long for. Contemplating the landscape brings us back to what’s essential. We go back to basics. Standing before that waterfall in Algonquin Park (yes, we finally made it!) made me aware of my littleness in front of so beautiful a landscape. I was vividly aware that I was made for more. Beauty in nature or beauty in a work of art should stir that vivid awareness of God’s presence, even if at first we can’t put a word or a name to it, that “hidden nostalgia” which John Paul II describes. Perhaps it’s no longer possible to visit the exhibition in Toronto, unless you decide to make the trip to Paris to see it (where it will be featured in the Musée d’Orsay), but there is plenty of landscape to go around right here in Canada.