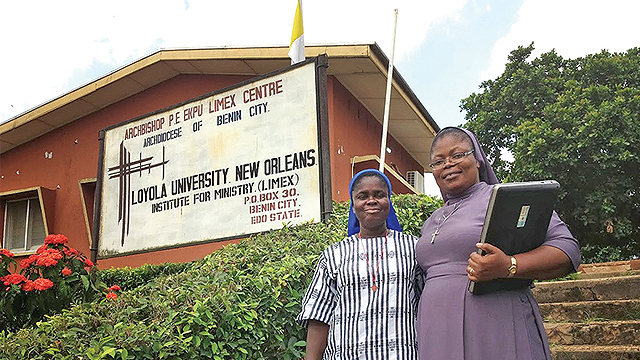 The Loyola Institute for Ministry (LIM) has been shrinking the world one webinar and one online course at a time, and now it is embarking on a new program that will aid seven religious communities in the U.S. and Africa strengthen their social communications and transmit to the world who they are and what they do.   With a $900,000 grant from the Conrad N. Hilton Foundation – which sets aside money in part to help Catholic religious communities – LIM is launching a web-based program to help Catholic sisters in the U.S. and Africa enhance their leadership skills, strengthen their ability to spread their charisms through social media and, it hopes, increase vocations. Some of the grant money will be used to purchase new computers and faster Internet access for the various communities. Teams with Salt+Light TV In addition, LIM will partner with Toronto-based Salt+Light Television, headed by Father Thomas Rosica, to create short videos to promote their religious communities and their ministries. Father Rosica serves as the English-speaking assistant to the Vatican Press Office for the Synod on the Family. “We’re really committed to distance learning, and through that commitment to distance learning we increasingly have had a focus on communication and the spirituality of communication,” said Dr. Thomas Ryan, director of LIM. “The central event of our faith is God’s communication of God’s word in Jesus. That’s what our faith is about. We are called, as a result, to be attentive to our communication and to imitate God’s pedagogy.”   Ryan said another aspect of why the program fits under the Loyola umbrella is LIM’s “interest in Catholic identity and how schools, as well as religious communities, can hand on their Catholic identity and charisms in this new era.” The three African communities participating in the program are the Sisters of the Sacred Heart of Jesus (Nigeria), Sisters of Our Lady of Kilimanjaro (Tanzania) and the Religious of the Sacred Heart (Uganda and Kenya).   The four U.S. congregations in the program have a large presence in the Archdiocese of New Orleans – the Daughters of Our Lady of the Holy Rosary of Chi Hoa (U.S. province of the Vietnamese order), Sisters of the Holy Family, Marianites of Holy Cross (U.S. and France) and the Sisters of Mount Carmel. Ryan said the grant provides for a three-year, pilot program. The course will include studies on the theology and spirituality of communication and teach advanced social media skills.   “We’ll see if this can help these congregations, and we would like to expand it beyond these congregations,” Ryan said. “Basically, these congregations are ones we know because we have had graduates from them.” Each congregation will have six nuns participate in the courses. Three of those will pursue graduate certificates in the theology of ministry, and three will take the courses for continuing education certificates. “The end result, we hope, will be an increase in vocations, an increase in contributions from benefactors, an increase in leadership potential and an increased knowledge of the Catholic faith,” Ryan said. No time zone problems Because the participants are in different time zones, the courses will be “asynchronous,” which means students will take them when it fits their schedules. “We do hope to have a few live gatherings,” Ryan said. Some of the communities will have to deal with infrastructure issues, Ryan said. In Tanzania, electricity is intermittent, so the grant provides for solar-powered equipment to run the computers and maintain an Internet connection. Father Rosica’s role will be to coordinate Salt+Light’s production of high-quality videos – one being a longer-form documentary that conveys the individual community’s charism, and the other being a short one that can be used in a social media setting. For more information, contact Ryan at 865-2069 or tfryan@loyno.edu. Information on LIM is available at www.lim.loyno.edu.

This article was originally published by Peter Finney Jr. on Clarion Herald.