Loving even our enemies: The Way of the Cross 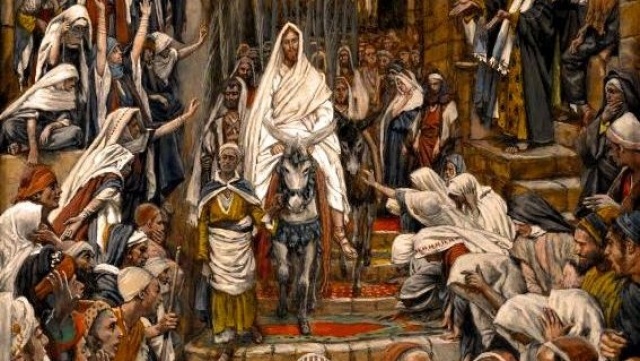 A reflection for Palm Sunday There are two Gospel readings for this Sunday, Palm Sunday. The first is the triumphal entry of Jesus into Jerusalem (Matthew 21:1-11). This Gospel is proclaimed as our palms are blessed, uniting us with the same crowds that cried “Hosanna” and praised Jesus as their king, “he who comes in the name of the Lord”! The second is what we will hear some minutes later, the Passion according to Saint Matthew (26:14-27:66). It is not difficult to see the stark contrast between Jesus’ entry into Jerusalem, and His suffering and death there mere days later. The same crowds who heralded Jesus as their king, the Messiah, the “Son of David,” will put Him to death under the charge of being “King of the Jews.” The same voices that cried “Hosanna” will shout “Crucify him!” and will proceed to do precisely that. We see the disturbing contrast as people who see the whole picture. We see the whole event as it unfolded, laid out neatly on the pages of the Gospels from start to finish. What would it have been like for Jesus? Did He think everything was going to be wine and caviar as He entered Jerusalem? Did He mistakenly think that the admiration of Palm Sunday would crescendo into a glorious and royal reign, hoisted on the cheering shoulders of His admirers? Was Jesus fooled by the jubilation of the crowds that welcomed Him? Jesus enters Jerusalem knowing that He will die. Not only that He will die, but that He will be betrayed, be rejected, suffer greatly, and be killed. Jesus foretells His suffering and death time and time again throughout the Gospels. He tells His disciples: “The Son of Many must undergo great suffering, and be rejected by the elders, the chief priests, and scribes, and be killed…” (Mk 8:31; Lk 9:22; cf. Mt 17:23). He warns His disciples sternly: “Let these words sink in: The Son of is going to be betrayed into human hands” (Lk 9:44; cf. Mt 17:22). So why does Jesus let them welcome Him in this way? He did not cease criticizing the hypocrisy of the Pharisees, why did He not rebuke the hypocrisy of the crowds – applauding Him one day and abandoning Him the next? On one hand, what they were saying was true. Jesus truly was what they longed for: the Messiah, the king, the Son of David! Their shouts were not in vain: “Hosanna! Hosanna in the highest! Blessed is He who comes in the name of the Lord!” No one could fault them for telling the truth! At the same time, under the influence of the chief priests, the elders, and the scribes, they would fall away from Him, like the disciples, abandoning Him to the agony of the Cross. Why did Jesus not protest? “Silence, hypocrites! Do you not know that I come here to die?” Jesus did not protest because He knew He was coming to die for them. It was not need of their love that drove Him to be silent and accept their affection; it was His love for them. We see on display in these two Gospel readings the supreme example of Jesus’ teaching, “Love your enemies, do good to those who hurt you” (Lk 6:27; cf. Mt 5:44). Often we may find that we do not have many true enemies in life. It can be difficult to think of people we truly hate or despise. More often, it is the half-heartedness of those closest to us that hurts us the most. It is when people that we love are silent that we most suffer. It is when those closest to us turn away that we are most abandoned. Sometimes this turning away is definitive, forever. Other times it is in smaller, everyday ways. We can be hurt nonetheless. Putting together what happens on Palm Sunday and what will happen in the days that soon follow, we learn Jesus’ approach to these situations. “Love your enemies” is not just to be applied to our most avowed nemeses. It is also an attitude of love towards the little enemies we may find hidden within our dearest friends. We do not accept these faults or inconsistencies of our neighbour, friend, or family member out of sheer obligation, because we need their love, or because we want to put on a sugary face while feeling sour inside. Rather, we accept even their weaker sides out of love for them. We accept their weaker sides as Jesus accepted those of the crowds who welcomed Him in Jerusalem. We accept their weaker sides as Jesus accepts ours. Jesus enters Jerusalem to die for the crowds who welcomed Him. Jesus enters Jerusalem to be betrayed by His enemies – the chief priests, the elders, and the scribes – but also by His closest friends, His admirers, and His disciples. He enters Jerusalem and suffers until death out of love for each of them. He accepts their love out of this same love for them. Do we welcome the love of others as He welcomes ours? Are we able to love them even when their “Hosannas” are found wanting? Do we love them as Jesus loves us? Journey through Lent towards Easter with Salt + Light!