Synod Week 3: Looking to our pastors and teachers for a sign 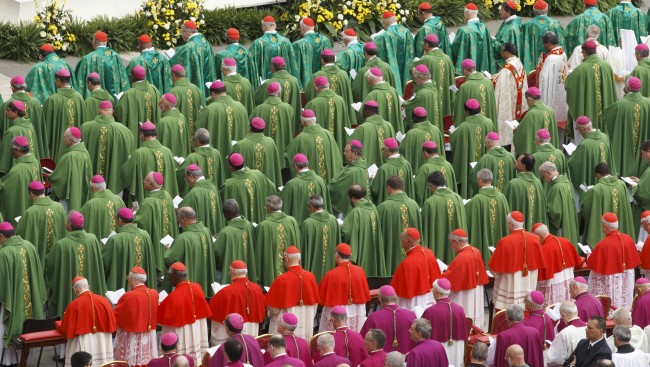 At the beginning of week three of the Synod on the New Evangelization, the compiled “List of Propositions” was presented in the General Assembly.  The small language groups had worked tirelessly the week before, on a very tight timeline, to synthesize the interventions and the open discussions of the Synod Fathers.   The Relator General, Cardinal Wuerl of Washington, organized these initial propositions in a first draft of the document that after this week will be revised and given to the Pope on behalf of the Bishops. As many of you know, I have been here in Rome for the last three weeks covering the Synod for Salt and Light.  It is fascinating to see how the nerve center of the Church functions, and in particular how the bishops from around the world interact with one another.  And of course, the anticipation for the "New Evangelization" is growing, not least among the many young Catholics I’ve spoken to over the past few months. Going about my work, I came across an interesting text in the Synod Hall which read: “The person evangelized goes on to evangelize others.  Herein lies the test of truth, the touchtone of evangelization.  Evangelization is a complex process made up of varied elements: the renewal of humanity, witness, explicit proclamation, inner adherence, entry into community, acceptance of signs and apostolic initiative.” I thought to myself this captures so well what has been discussed and presented here at this Synod so far!  Let me take this apart and draw some connections with what has emerged over the past two weeks: 1) “The person evangelized goes on to evangelize others.” Many Synod Fathers have stressed the need to recapture the fervor of their initial encounter with Jesus and to share that with others openly. 2) “The renewal of humanity.” The call has been made for a renewed “Christian Anthropology,” which sees humanity fully realized only in relationship with Christ and each other as an expression of the triune God 3) The power of “witness.”  This has been continuously emphasized regarding in particular the formation and vocation of the laity in the life of the church and in the world. 4) “Explicit proclamation.”  The importance of talking about the person of Christ, not merely doctrines, teachings, traditions, symbols, etc. has been highlighted throughout the sessions. 5) “Inner adherence.” One of the most powerful interventions was the address by Dr. Rowan Williams of the Anglican Communion who said that, “People will read in our eyes who we are before we open our mouths.”  Internal adherence to the faith and the call to holiness are, according to the bishops, essential for the New Evangelization. 6) “Entry into community.” The parish community as a foundational structure in the church and the call for its renewal or revival has been one of the few issues spoken of by multiple bishops from all continents. 7) “Accepting the signs.” Related to 6) above is the recognition of the new ecclesial movements in the Church today as a sign of the times.  The bishops seem to be in agreement that these need to be supported and encouraged, always in relation to the local parish and diocese. 8) “Apostolic initiative.” Many have encouraged their brother bishops to take visible, tangible steps to model and implement the New Evangelization and reach out to others.  Archbishop Tartaglia of Glasgow, Scotland even said, “You know, I think it’s so important for the bishop to talk directly to young people.  They like talking to us, so let’s talk to them!” When I read this text it was like a light bulb moment.  I was shocked at the level to which it so precisely captured the major themes of this Synod.  What was the text?  A small, blue, slightly worn brochure entitled “Evangelization in the Modern World: A Summary of the Apostolic Exhortation of Pope Paul VI, Evangelii Nuntiandi. December 8, 1975.”  The brochure had been published as a pastoral aid almost forty years ago. In my many discussions with young Catholics about the Synod on the New Evangelization, one particular thing has consistently been suggested: that if ever there was a Synod that could produce something new, different, creative, and inspiring, it must be this one.  “Even a gesture of solidarity with our generation would go a long way,” they tell me.  Personally, I thought (and hoped) that perhaps such a gesture would come in the form of the use of the vernacular in the General Assembly.  I wonder how many Synod Fathers found it difficult to follow Elenchus Unicus Propositionum on Tuesday morning. Of course it is too soon to judge the fruits of this Synod, and in fact I have been affirmed and inspired by many of the things I’ve seen and the people I’ve spoken to over the past few weeks.  Archbishop Conry of Arundel and Brighton, for example, said at Tuesday’s press conference that, “Some of the best conversation happens in the corridor,” and that, “Part of the value of the synod is simply being together as bishops.”  From what I have seen, this is undeniable.  Great things happen when the bishops of the world come together. Still, a Synod on the New Evangelization begs the question, what is really new about it?  At this crucial moment in the history of the church, and indeed in the history of humanity, might we not look to our pastors and teachers for a sign? – of hope, of solidarity, of creativity, of inspiration, of the Spirit? --- Photo courtesy of Catholic News Service