Letters from the Holy Land: The Sea of Galilee 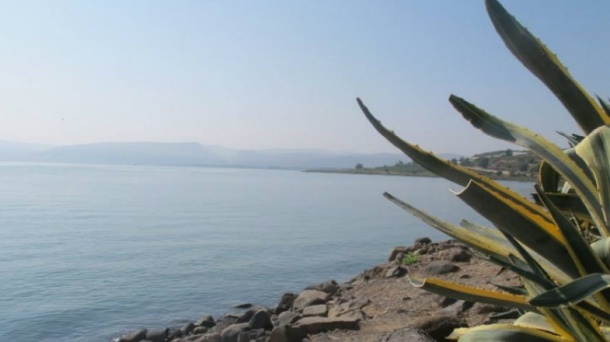 I quote our guide as we stand on the Mount of Beatitudes admiring the sunset on the Sea of Galilee: “the Sea of Galilee receives and gives, but the Dead See receives and never gives. The Sea of Galilee receives water from the river Jordan, and gives water to the Dead See in the South, but in the Dead Sea it stops. Ok?”
Maybe without realizing it he shared a deep truth of our faith, if we don’t give we die, if instead we give, we generate life.
Today, standing at the shores of the Sea of Galilee I reflect on ‘life’, and what these mountains witnessed 2000 years ago. Just think: on these waters Jesus calls the apostles, he suggests to throw out the nets on the other side of the boat after a night of fishing without a catch, and they pull out a multitude of fish. Then he says; “come and I will make you fishers of men”.
Or during a stormy night Jesus sleeps in the boat and he teaches that as long as we are in Him, we have nothing to fear, we participate in his life. Or consider St. Peter who was able to stand on water because he believed, and only started sinking when he started doubting.  Yet Jesus was right there to pull him back up.
Yes, these waters of the Sea of Galilee have left a mark inside me. It's not so much the water in itself, but these waters are like a humble background against which Jesus could act and bring us to Life. Maybe it’s not a coincidence that the Sea of Galilee is the lowest freshwater lake on Earth; - 705ft., almost a tangible sign of humility. This I tell myself: “be humble like the waters of Galilee”
However, today another episode struck me deeply. We had a chance to visit the site where John the Baptist baptized Jesus in the river Jordan. We arrived there after a road trip through the West Bank during which we saw signs to the left and right warning of land mines.
The river Jordan marks the border between Israel and Jordan, so when we 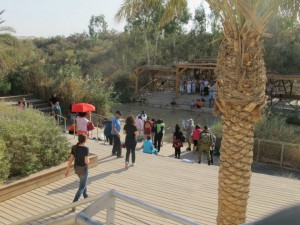 arrive at the site we find at least seventy Israeli soldiers keeping an eye on the Jordanians across the river. At the same time we see the Jordan soldiers doing the same from their end, and in the middle is that tiny stream of water.
In this apparent situation of division it struck me that precisely here the Holy Trinity was revealed for the first time, because we know that as Jesus came up out of the water, heaven opened, and the Spirit of God, like a dove, descended upon him, and a voice was heard from heaven saying, "This is my son, whom I love; with him I am well pleased."
So today this taught me that I should not fear to live for unity in situations of division, because in this muddy stream Jesus chose to be baptized. Again, it was through a very humble action that God revealed Himself in all His glory. 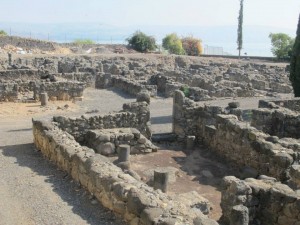 Even the city of Capernaum is such a ‘normal’ place, with random regular houses. Yet you can see the remains of the synagogue and the first meeting place that would become the first Church. Here Jesus cured the lame man who got lowered through a roof; you can still see what the houses looked like at that time! It’s all so normal and simple.
Really, I learn here in these places that Jesus is much more human then I thought, and that brings him much closer to me then I could ever imagine.