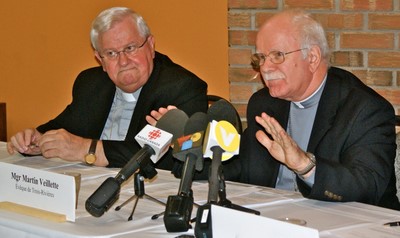 As reported on the Wednesday September 23rd edition of Zoom, while meeting in their annual plenary assembly, the Bishops of Quebec held a press conference to release a letter regarding the Ethics and Religious Culture program. Here is the letter:

A letter to the Minister of Education on the Ethics and Religious Culture Program The following is a translation of a letter sent by Bishop Martin Veillette, president of the Assembly of Québec Catholic Bishops, to Madame Michelle Courchesne, Minister of Education, Recreation and Sports, on the Ethics and Religious Culture program. The letter was sent to the Minister on September 15, 2009. This English version was prepared subsequently for release at the September 23 press conference. • • • Madame la Ministre, Eighteen months have passed since we wrote to you concerning the new Ethics and Religious Culture program (ERC). We had thoroughly studied the program, acknowledged the importance of its two main objectives - the recognition of others and the pursuit of the common good – and concluded that, while the new program had certain positive features, it also had serious limitations. Read the rest of the letter