November's Lectio Divina: To the Church of Ephesus, Smyrna, Pergamum, and Today

The persecution of Christians has been on our minds and hearts over the last couple of weeks.
Just this past week in Toronto there was an ecumenical prayer service; praying particularly for the 58 victims of the October 31st attack on a Syriac Catholic Cathedral in Baghdad.  The vigil was an event to remember those who died, but to also stand in solidarity with our brothers and sisters who are enduring so much. 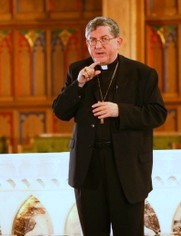 The persecution of Christians is noted in this month's broadcast edition of Lectio Divina as well.  In this second episode reflecting on Revelation, chapter 2 verses 1-17, Archbishop Collins recalls the Churches of Ephesus, Smyrna, and Pergamum were enduring very real persecution. St. Michael's Cathedral, which hosts Lectio Divina, became quiet when the Archbishop noted how little has changed... many of us thinking to the attack in Baghdad. Archbishop Collins also suggested we consider what our faith means to us: are we embarrassed to admit we are Christians?  Are scared that it might make people think less of us?  Are we afraid to be who we are because we may be shunned? The reality is, the persecution we experience in North America, is a far cry from the persecution our brothers and sisters endure in the Middle East. We might be afraid to be smirked or snickered at when acknowledging we are Catholic, but there are those who risk a lot more than a bruised ego. That's certainly worth reflecting on and praying about. Lectio Divina with Archbishop Thomas Collins: Reflections on the Book of Revelation airs this Sunday, November 14th, at 9:30pm ET/10:30 pm PT, or catch the encore presentation Wednesday, November 17th, at 8:00pm ET/9:00pm PT. For more information on this season — the broadcast dates and Scripture that will be prayed — visit our Lectio Divina prayer here.