Lectio Divina offers a reminder of the difficulty of detachment

“Love people and use possessions, don’t use people and love possessions.”
Those words from Archbishop Thomas Collins at May's Lectio Divina.  You can catch that episode this Sunday, May 23rd at 8:30pm ET, or the encore presentation Wednesday, May 26th at 8:00pm ET.  This month the Archbishop focuses on the Parable of the Good Samaritan, from Luke chapter 10, but it was what he said above that provided a keen reminder of what I had been contemplating over the past month.  To some of us the Archbishop’s comment may seem hard to believe—how someone could love an object more than a fellow human being—but on the contrary, in a society like ours, this seemingly outlandish concept hits many of us close to home. 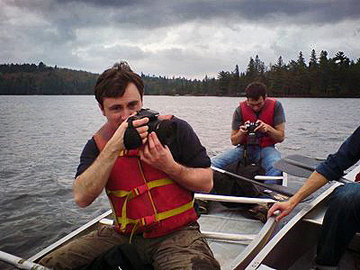 A weekend to remember One month ago four friends and I went to Algonquin Park for the weekend.  All was well, a few nice hikes, praying together by the lake shore, and climbing trees—boys will be boys—until we decided to go canoeing... “Great, I love canoeing.  Hey Josh, are you bringing your camera gear?” I asked. “Yes,” he replied. “Okay, so will I, but we have to be in the same canoe so that neither one of us will goof off.” “Plus someone died from hypothermia last week when they fell into a lake in this same park.” “Yeah, so don’t do anything stupid Lawrence!” “Dude, I’m from B.C., I practically went to school in a canoe.” Murphy’s Law 101: what can go wrong, will go wrong Canoeing was great; Josh and I really gelled as partners.  In fact, I felt so confident that I decided to give a canoeing lesson on proper technique to two of the other guys.  It’s moments like these, when you look back, that you see how humility might have averted disaster, nevertheless no more than 10 seconds after my teaching debut Josh and I were floating in the waters of our own humiliation—along with 5000 dollars worth of camera gear. In our defense, neither one of us was fooling around, we just both happened to paddle hard on the same side while at a stand-still. We lost our balance and in we went.  Regardless, as the man in the back I am ultimately responsible (don’t tell Josh I said this!).  Fortunately there is always a silver lining and ours was being next to an island at the fateful moment, so that within a few minutes we swam safely to shore.  Furthermore, before we could even think about what happened, two boats were on their way to rescue us, a humiliating experience but we were very blessed to get a ride back to the dock. In addition to our camera gear, both Josh and I had our iPhones with us and immediately upon arriving back to camp, I impatiently pried mine open and blow-dried it back to life—the only casualty being the LCD screen.  The following weeks saw me back and forth to the iPhone repair shop, managing to spend over 200 dollars on three brand new LCD screens before my phone finally worked!  The prognosis on the camera gear is still in question, but either way it’s going to be pricey. Why does matter matter anyways? Let’s face it, when we buy something we expect it to be there when we need it.  I don’t buy clothing with the forethought of them ripping and I don’t buy a computer thinking it will crash.  Of course we all know this is possible—sometimes even likely. However, nearly everything we buy has a function and when we want it to perform, it better!  Now don’t get me wrong, there’s no problem with having stuff, but sadly we can become so attached to our possessions that they end up possessing us. The difficulty is in detaching ourselves enough that we see ourselves as custodians rather than owners.  To be a custodian means that what we have ultimately is not ours—we only use it while we can—and consequently we become detached. Lessons learned It was back at World Youth Day 2005 in Cologne, Germany that I learned my lesson.  As is customary all pilgrims are given a backpack to carry stuff, and to make a long story short, I lost mine along with my camera and various personal items.  I was devastated.  But at that moment I realized that I had two options: to mourn the loss indefinitely—ruining the rest of my trip—or let go and enjoy myself.  Reluctantly I chose the latter, yet in the end I thoroughly enjoyed the rest of my stay.  To this day I have never forgotten the lesson I learned in Germany. It’s times like these when it helps to remember those wise words of Job, "Naked I came forth from my mother's womb, and naked shall I go back again. The LORD gave and the LORD has taken away; blessed be the name of the LORD!"