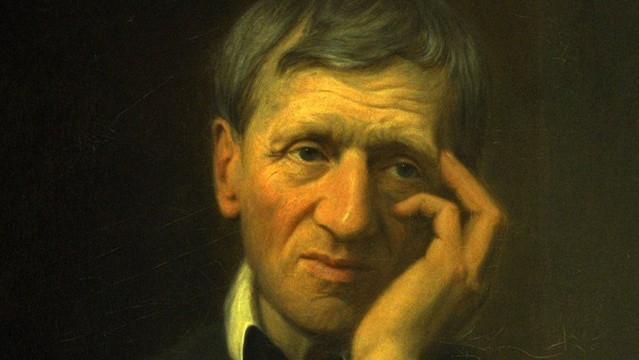 The news on July 1st that Cardinal Newman would be canonized on October 13th was greeted with joy by many in the Church who had waited and prayed for years in anticipation of this moment. Yet while his name has graced many university chaplaincies around the world, it is reasonable to ask: what difference does the witness of this man make today, particularly to the young? It is true that he is quite likely the greatest theological thinker in the English language; it is also true that his intellect did not render him unable to reach people as a gifted pastor in parish ministry. Yet neither of those facts should obscure other truths about Cardinal Newman: he was a seeker of truth, and he sought after the truth with a human face. The biographical details of his life are well-known; his life spans almost the entirety of the 19th century. Newman’s life is almost evenly divided between the Anglican period and his life as a Roman Catholic. One trait that marked him from his youth, though, was a passionate search for truth. From a conversion to evangelical Protestantism as an adolescent to his early adulthood as an Anglican priest and Oxford don to his maturity as a Catholic, Oratorian, and priest, he never stopped searching for truth, and shaping his life around the truth that he found. Newman also understood that truth has a cost, as his conversion to Catholicism left him with many friends (and family members) who would no longer speak to him. At the same time, he was also widely distrusted by the Catholics of England for years after his conversion, so his reception of the cardinal’s hat from Pope Leo XIII in 1879 was a real vindication of his life’s work. He himself explained some months later why he accepted: “For 20 or 30 years ignorant or hot-headed Catholics have said almost that I was a heretic . . . On the other hand it had long riled me, that Protestants should condescendingly say that I was only half a Catholic, and too good to be what they were in Rome. I therefore felt myself constrained to accept.” One cannot overlook the price that Newman paid in his search for truth. His example teaches us that searching for truth is not necessarily rewarded with an easy life. In addition to the difficulties his decision to become Catholic caused in his personal life, his professional life was not excepted from troubles. Newman’s suffering didn’t stop him, but it was severe. In his private journal from 1863, he expressed his feelings:

O how forlorn and dreary has been my course since I have been a Catholic! . . . since I made the great sacrifice, to which God called me, He has rewarded me in ten thousand ways, O how many! but He has marked my course with unintermittent mortification . . . since I have been a Catholic, I seem to myself to have had nothing but failure, personally.

Newman passionately searched for truth, and his conscience directed him in his search. He became Catholic when his conscience directed him to do so, aware of the cost but not deterred by it. It was simply what he had to do. As John Ford phrased it, Newman was received into full communion with the Church only when he became “convinced that the Roman Catholic Church was where his favorite patristic authors – Athanasius, Ambrose, Augustine – would worship were they alive today.” Yet the truth that Newman sought was not simply doctrinal or dogmatic, as important as those qualities were to him. Truth had a human face – that of Christ – and was incarnated in love. In any number of his sermons, Newman is concerned about externally good people who lead virtuous lives – but not out of love. He writes, “It is possible to obey, not from love towards God and man, but from a sort of conscientiousness short of love; from some notion of acting up to a law; that is, more from the fear of God than from love of him.” Newman’s faith was enfleshed by love, and only love was an adequate motive for virtue. For Newman, love leads the Christian to a new way of life:

He who loves, cares little for any thing else. The world may go as it will; he sees and hears it not, for his thoughts are drawn another way; he is solicitous mainly to walk with God, and to be found with God; and is in perfect peace because he stayed in Him.

For those new to the writings of Saint John Henry Newman, his Parochial and Plain Sermons provide an accessible and engaging introduction to his thought and spirituality. The biographies of Newman are legion; for a fascinating alternative view, consult Joyce Sugg’s Ever Yours Affly: John Henry Newman and His Female Circle (Fowler Wright Books Ltd., 1997) for insight on how Newman related to the women in his life. Saint John Henry Newman, pray for us! Fr. Nickolas Becker, OSB, is a monk of Saint John's Abbey in Collegeville, Minnesota. He is assistant professor of theology at the College of Saint Benedict and Saint John's University (which includes a School of Theology and Seminary). His specialization is moral theology, and Cardinal Newman was a prominent figure in his doctoral dissertation.