Keeping an Eye on the Economy

The Pope’s prayer intention for March coincides with yesterday’s throne speech and today’s unveiling of the federal budget. The economy of this past year proved to be a source of confusion and distress around the globe, specifically amongst us Canadians as we saw this year’s federal deficit fall to $56-billion and job losses soar to 8.7 percent which works out to 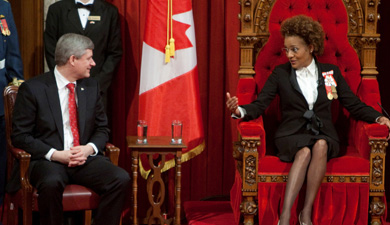 roughly half a million jobs. Now that the Olympics have wrapped up, the hope is that Canadians, fresh off our Olympics triumphs can now own the economic podium.
Governor General Michaëlle Jean officially reopened Parliament with yesterday’s speech. (See news report from CBC or entire speech.) Today the fate of our newest budget will be speculated on, criticized and commended for days to come by a countless number of parties. At this time, it is important that we not just focus on the numbers, but also on the ethics behind the motions put forth in Parliament’s plans for the Canadian economy. Several key resolutions were addressed in the Throne speech which included: the freezing of salaries of federal politicians, restraining overall government spending and a possible change to the wording of the national anthem (which is a whole other topic for debate altogether). This year’s speech was a reported 6,000 words whereas the 2009 throne speech was 5,400 words shy of that at 600. The Pope’s prayer intention was in even fewer words, but the message was perfectly clear, void of percentages and political biases. This month he prays:

...that the world economy may be managed according to the principles of justice and equity, taking account of the real needs of peoples, especially the poorest.

So in accordance with Pope Benedict XVI’s prayers for our economy, we must be attentive to what is taking place in the next few days. I am no expert on economics and finance, but I can understand those innate differences between right and wrong. I feel that we as Canadians, especially the young-adult professionals in my demographic have to make that conscientious effort to educate ourselves on what parliament will be passing this year to distinguish what is right and what is wrong for our nation. (No matter how much we’d rather discuss the latest LOST episode, or am I the only person still watching that?) These motions directly affect many factors in the workforce and community, whose well-being will one day soon be in our hands. Let us as Catholics follow in example of the Pope’s intention as we face some hard truths about the state of our economy. Rather than dwell on the negatives, we should look at how our new budget can work towards helping those most in need in Canada and the world at this time. Let’s leave the economy of ’09 where it belongs, in the past and of course, on our tax returns. - Photo: Office of the Prime Minister