Just Laying Around the Parish

Antiques Roadshow is one of my guilty television pleasures. 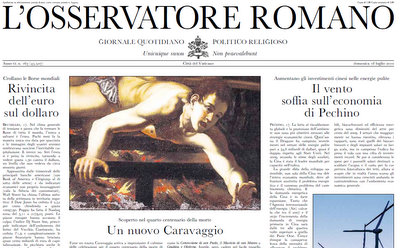 I find it fascinating how people can have priceless objects just sitting around their homes for years that get passed down through the generations or that they pick up at the odd yard sale for $20.  (Sometimes I even venture down into my basement to see if maybe I have a Ming Vase lying around.) Antiques Roadshow would have a field day with what the Jesuits of Rome may have had under their noses for hundreds of years. On the front page of the Vatican Newspaper L’Osservatore Romano is a story about a painting owned by the Jesuits. The headline reads “The New Caravaggio?” The painting is speculated to have been painted by the Italian Baroque artist who is commonly referred to as il Maestro.  The painting is known as the Martyrdom of San Lorenzo. It depicts a semi-naked man with his mouth open and arms outstretched in desperation as he lies over flames. The Vatican Newspaper says the painting is undergoing analysis to determine if it was in fact painted by Caravaggio. It would be a significant discovery if it is indeed proven to be authentic. Celebrations are taking place in Rome to mark the 400th anniversary of the artist’s death. Thousands of people have visited exhibitions of his work throughout the city. Churches with Caravaggio works even stayed open through the night last weekend to allow visitors a chance to see some of art history’s most important masterpieces. UPDATE:  After study, experts found the painting was not by Caravaggio, but perhaps one of his followers.