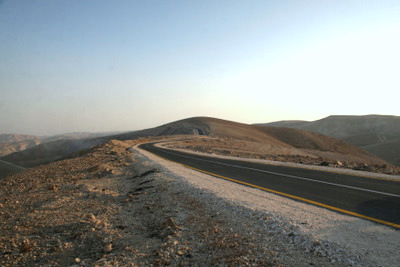 Ottawa reader Fr. Jonathon Blake responded to my last post about the Holy Land, where I expressed how difficult it was to maintain a pilgrimage mindset amidst work responsibilities. He suggested that this challenge could be similar to a priest’s experience of Christmas, when accumulated graces might only reveal themselves once the “marathon” schedule has subsided. While I’m finding much truth in his observation, not every awakening has been a spiritual one…
The Judean desert is one of the most striking visuals in Israel and the Palestinian Territories. Driving 15 minutes east of Jerusalem towards the Dead Sea, the city’s fertile, olive-tree covered hills are replaced by massive, arid sand dunes. To film the landscape, we pulled over near a Bedouin tent-village, where, parked next to a row of SUVs, a camel was trying hard to not look redundant. 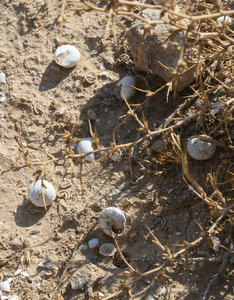 Desiccated thorny plants with tiny pink flowers testified to a rainy season some time ago. Sun-bleached snail shells also spoke of wetter times, though where the survivors could have taken refuge in this empty terrain, I did not know. Along with a few stones, I collected about a dozen shells as cheap souvenirs. These, I imagined, could be artfully arranged in plant pots in my apartment. A full month had passed since my return when I noticed that one shell, curiously, was outside of its plant. After my housemate insisted he hadn’t touched it, there was only one explanation: long presumed dead, this zombie snail was impossibly alive. Soon thereafter, two, then three, and eventually five began crawling around the makeshift aquarium I’d fashioned out of a plastic juice pitcher. These creatures, I learned, were well-equipped for the desert. They endure the oppressive heat by aestivating, a process whereby they create a white, calcified barrier called an epiphragm to retain moisture within their shells. Remaining dormant inside for as long as several years, the snails will break their seal when they sense rain—or, in this case, when I water my plants. 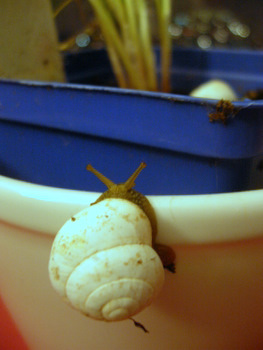 While admittedly proud of my new exotic pets, I was mortified that I unknowingly brought a live animal into Canada. I was also overwhelmed by a sense of responsibility for these snails, who were now being deprived of the algae and lichens that form their natural diet. Since I clearly lacked the means to care for them, I placed a call to the Metro Toronto Zoo, who immediately transferred me to a man with the curious title, ‘curator of birds and invertebrates’. The zoo, he told me, was interested in adopting them! As they had again retreated into their shells, I placed them in a little zip lock bag—the same way that I had brought them to Canada—and carefully drove my precious cargo to its new home. After adding a few drops of water to the bag, the snails were crawling over each other once more. A zoologist named Lydia suggested that if the zoo can find the right food to keep them alive, such active molluscs might be “displayable”. I left the zoo, glowing.