JP II, We Love You 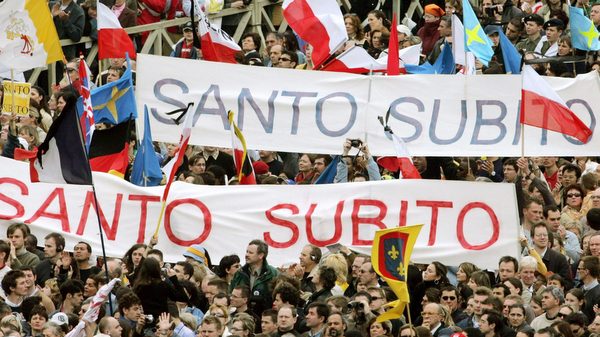 Mourners hold banners that read "sainthood now" during the funeral Mass for Pope John Paul II in St. Peter's Square at the Vatican April 9, 2005. (CNS photo/Reuters) Everyone in the office knows that I love Pope John Paul II. In fact, I have a huge image of him on my desk which I proudly display. Maybe it’s because he was elected Pope before I was born. He was, for most of my life, the only Pope I’d ever known. And its not just me, its a family thing. My mother credits almost everything to his intercession. In fact, she swears that the reason that her wallet was returned to her on three separate occasions was because of the Pope John Paul II prayer card inside. I don’t know about you - but I can’t help but raise my eyebrows every time she tells this story. Its not without a hint of sarcasm when I say “yah, mum, of course that’s the reason they returned your wallet because they love Pope John Paul II too”. All joking aside, it’s my mother who has had the last laugh. It’s not lost on me that maybe it was her prayers that were answered when I started working for Salt + Light Television - a place which exudes John Paul's presence. So yes, my mother can chalk up another miracle thanks to the intercessory prayer of Pope John Paul II. 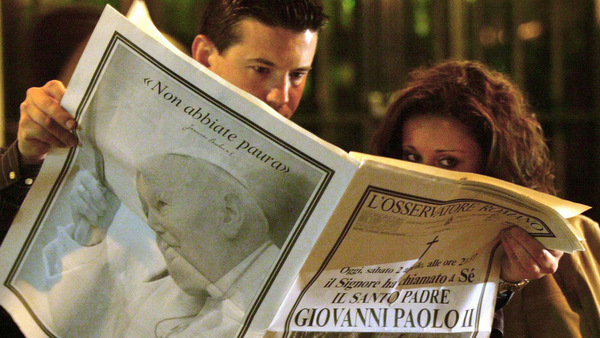 A couple in St. Peter's Square reads a copy of L'Osservatore Romano following the death of Pope John Paul II April 2, 2005. (CNS photo/Reuters) It goes without saying, that the upcoming canonization of John Paul has special significance for millions of people around the world. Perhaps one of the saddest days of my life was the day I woke up and heard the news of his passing. It hit me hard. I wasn't practicing my faith at the time, and I wept. I wept because I realized how much I loved and admired him, I wept because of how far I wandered away …and I wept because I could n’t conceive of anyone else taking his place. He was the pope, he was my pope. As I watched the funeral on television and as they processed the simple casket through St. Peter’s Square my heart ached. I suspect that when he is canonized on April 27th many will feel that he has taken his rightful place among the saints. So in honour of the occasion, I’ve scoured the Catholic News Service photo archives and put together a series of images paying tribute to this saint. The series is called "JP II, We Love You". 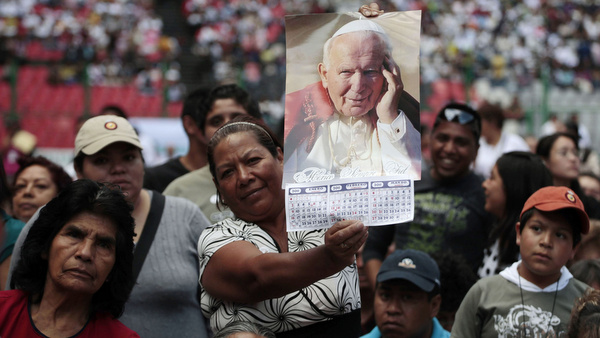 A woman holds a calendar with an image of the late Pope John Paul II during an event in Mexico City's Azteca Stadium to mark the sixth anniversary of his death April 2, 2011. (CNS photo/Jorge Dan Lopez, Reuters). All images for this photo series are courtesy of Catholic News Service.