John XXIII and John Paul II canonizations on the horizon 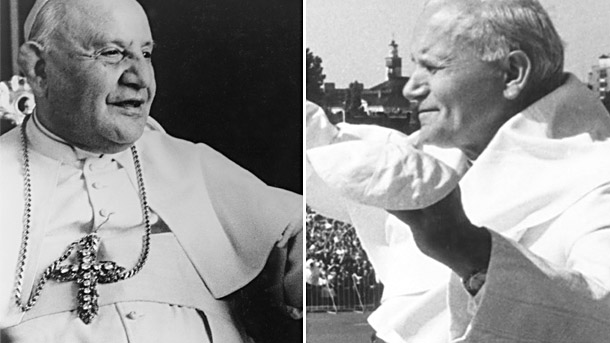 Word has spread quickly about the possibility of two beloved popes of recent history being canonized together in the coming months.  Pope John XXIII, who will forever be remembered for calling and opening the Second Vatican Council, and Pope John Paul II the iconic global figure, are now awaiting Pope Francis' final approval.  Catholic News Service brings us the story:

Saint's congregation reportedly acts on causes of JPII, John XXIII By Catholic News Service Jul-3-2013 VATICAN CITY (CNS) -- The cardinals and archbishops who are members of the Congregation for Saints' Causes met July 2 and, according to Italian news reports, took steps to advance the sainthood causes of Blesseds John Paul II and John XXIII. The Vatican press office confirmed the meeting, but said that all deliberations in sainthood causes are secret until the pope issues the relevant decrees. The Italian news agency ANSA reported that the cardinals approved the miracle needed for Blessed John Paul's canonization. Previously, a panel of physicians said there was no medical explanation for the healing that occurred, and a panel of theologians said there was evidence that prayers asking God to heal the person in question were addressed through the intercession of Blessed John Paul. The canonization would be scheduled after Pope Francis approves the publication of a decree recognizing the miracle and after he consults with members of the College of Cardinals. Although early reports had expressed optimism about a canonization ceremony in October to coincide with the 35th anniversary of Blessed John Paul's election, news reports July 2 said there was not enough time to organize the event. Instead, the dates under discussion were November or December, or even spring 2014. Apparently, the idea would be to canonize the two popes at the same ceremony. Polish Cardinal Stanislaw Dziwisz of Krakow, Blessed John Paul's longtime personal secretary, said he was grateful to Pope Benedict XVI for opening the late pope's sainthood cause and grateful to Pope Francis who, it appears, "will bring it to the solemn and official declaration of sainthood." In the statement, published on the Krakow archdiocesan website, the cardinal said that as Blessed John Paul's secretary "I had the privilege of being a witness of his holiness." Knowing that many sainthood causes take decades to complete, he said, "I thank God that in this life I will be able to rejoice over the elevation to the glory of the altars" of Blessed John Paul, whom he called his "father in faith and in the priesthood, and the one I served with love until his last heartbeat." The reported vote of the congregation's cardinals, he said, "shows once again that the path of holiness he followed was certain and is an example to follow."