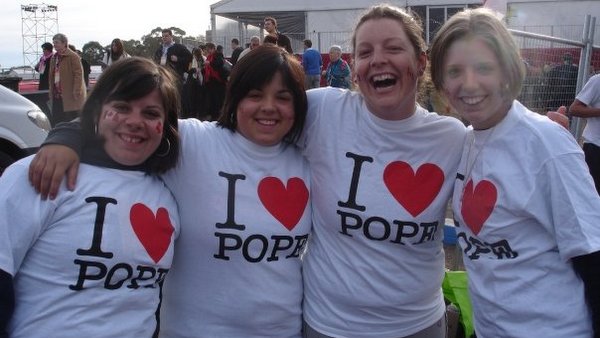 By Elizabeth Krump
In July 2008, the streets of Sydney, Australia were transformed with a swell of nearly one million young pilgrims. Despite an influx of youth, there was no vandalism, fear or fights as a result. This group of young people had gathered in solidarity to celebrate their Catholic faith at the invitation of the Holy Father.
I remember being in Sydney for the 23rd World Youth Day, singing praises and national anthems on packed trains, attending concerts and hearing renowned speaker Christopher West share John Paul II's teaching on Theology of the Body with a sold-out audience. The enthusiasm for the faith was palpable. Everywhere I went in Sydney I crossed paths with pilgrims filled with hope. One group from East Timor had secretly traveled to WYD, risking their lives to meet the Holy Father and share in the celebration of faith.
World Youth Day is the legacy of Blessed John Paul II, who will be canonized next month on Divine Mercy Sunday. John Paul II entrusted WYD to the youth of the world as an invitation to rise up as faithful witnesses to Christ. World Youth Day gathers together youth from every country, embodying the call of the Gospel, to "Go therefore and make disciples of all nations" [Matt 28:19].
John Paul II himself embraced this universal call to evangelize by visiting 129 countries during his Papacy alone. As the Vicar of Christ, he became a pilgrim, bringing the heart of the Church into a world in need of salvation. I recently heard the story of a woman who had met John Paul II during his visit to Toronto in 2002. When asked to describe what he was like she said, "When you looked at him it was like looking into the eyes of Love. He exuded Christ."
In Sydney, my group traveled with a good friend and seminarian – now priest – who took the opportunity to tell just about everyone we met that he was in the seminary. Other pilgrims would listen attentively as he took the time to share his vocation story. I now understand why they were so attracted to him. He had found the answer to the hunger for understanding, purpose and happiness that this world cannot satisfy.
During a famous homily to the people of Poland in Victory Square, 1979, Pope John Paul II said this, "[M]an is incapable of understanding himself fully without Christ. He cannot understand who he is, nor what his true dignity is, nor what his vocation is, nor what his final end is. He cannot understand any of this without Christ."
John Paul II is described as charismatic, magnetic, joyful and courageous. He was all these things and more because he was a man whose identity was found and lived in Christ. He was a pilgrim who found Jesus in the heart of every person he encountered and loved them as Christ loved us. He embraced his cross, suffering for the greater glory of God, until the very end. This is what made him a saint.
On April 1, 2005, in the final days of his life, John Paul II said, "I have looked for you. Now you have come to me. And I thank you." The pilgrim Pope, confined to his bed, was unable to go out into his Church. Instead, they had journeyed to be with him, gathered below in St. Peter's Square in prayer.
On April 27, 2014, approximately 10,000 pilgrim Catholics in the Vancouver area are expected to gather at the Pacific National Exhibition grounds to celebrate the Canonization of Popes John Paul II and John XXIII. Mass will be celebrated by Archbishop Michael Miller and Most Rev. Luigi Bonazzi, Apostolic Nuncio to Canada, and there will be an opportunity to venerate sacred objects of the two saints afterward. You are invited to attend! For more information, please click here
___
Elizabeth Krump is a student at Simon Fraser University in British Columbia, where she has been involved with Catholic Christian Outreach. Elizabeth has written for the B.C. Catholic and with two friends started Live 31 Vancouver, a blog/social group/discussion group for women trying to live their faith in the modern world.