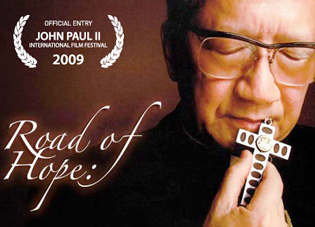 On Saturday November 7, I had the great privilege of attending the first ever John Paul II International Film Festival in Miami, Florida. Salt + Light’s documentary Road of Hope: The Spiritual Journey of Cardinal Nguyen Van Thuan was one of the film’s screened Saturday afternoon at Just the Funny Theatre in Coral Gables, a well known comedy club that opened its doors to the festival’s charismatic organizers, Laura Alvarado, Frank Brennan and Rafael Anrrich; just one of the many minor miracles in their nine month tour de force, creating, organizing and pulling off a stunningly successful, deeply moving and beautifully presented film festival that captured the essence of John Paul II’s call for evangelization through media.
I attended the afternoon screening of Road of Hope which was shown as a double feature along with God in China, a collaborative effort between the Becket Fund for Religious Freedom and Rome Reports. After each film two distinguished panelists gave their thoughts and then I had the chance to answer questions from the audience. It was a real privilege to discover a vibrant faith-filled community in Miami eager to see their spiritual values and faith transmitted through film and television. Saturday evening a crowd of several hundred gathered at Florida International University for the premiere of Human Experience, the closing film of the festival. This powerful documentary, produced by Grassroots Films, chronicles a band of young men from Brooklyn, NY who travel the world in the search of the answer to life’s burning questions: Who am I? Who is Man? Why do we search for meaning? From living with the homeless on the streets of New York City, to caring for orphans and disabled children in Peru, to time spent ministering to abandoned lepers in the forests of Africa, these men found themselves forever changed, and so did the audience at the John Paul II International film Festival Saturday night. Following an exuberant reception and awards ceremony, as I hailed a cab and headed back to my hotel I thought of Cardinal Van Thuan. After all, it was his extraordinary life that gave me the chance to be present for this festival. I thought of his years of isolation in Rome, following his release from prison. He was silent and did not share his sufferings and spiritual awakening in prison. He was concerned doing so would incite anger and vengeance. Then his mother told him that his life did not belong to him but to God, and that his experience of spiritual enlightenment in a small prison cell was a message that God would want him to share with the world. Those words touched Thuan’s heart and inspired him to share his testimony, which in turn made our film possible, and that very sharing of soul is what made all the other films that premiered at the first ever John Paul II International Film Festival possible as well. In recent years we are witnessing the work of the Holy Spirit in the creation of new media undertakings founded to communicate Christ’s eternal message to our digital age. But our growth and success rests on the people of faith who opt not to hide their faith but to share it with the world. I, for one am so thankful for Laura Alvarado, Frank Brennan and Rafael Annrich, three lay Catholics who heroically put their faith on display through the creation of this festival. I guess at the end of the day the greatest gift John Paul II gave to us young people during his 26 year pontificate was that he took us seriously. This weekend I saw the fruit being born as now his words are being taken seriously by a new generation of artists, filmmakers and media professionals who are daring to do the impossible… and on one glorious Miami evening, pulling it off.