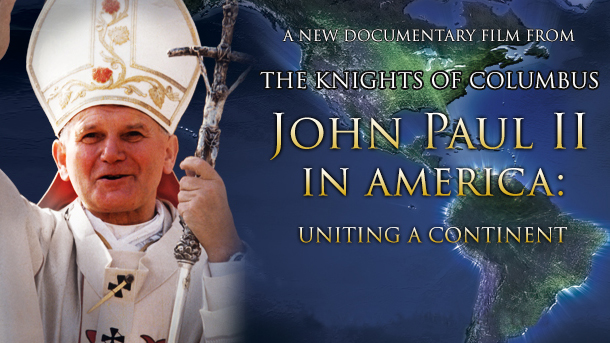 Canadian Premiere on Salt + Light Sunday April 12, at 9pm ET / 6pm PT
A new Knights of Columbus produced documentary on St. John Paul II and his relationship with North and South America will air April 12 on Salt + Light.
John Paul II in America: Uniting a Continent explores how the papacy of St. John Paul II left an indelible mark on the American continent. Driven by his singular conviction of a “United American Continent” under the patronage of Our Lady of Guadalupe, John Paul II’s papal travels from Argentina to Alaska generated massive crowds, shaped an entire generation and ultimately changed the course of history.
Narrated by actor Andy Garcia, the film features rare archival footage and insightful analysis from leading figures, including Cardinal Seán P. O’Malley of Boston, Supreme Knight Carl A. Anderson, John Paul II biographer George Weigel and former Vatican spokesman Joaquín Navarro-Valls. Viewers will be both intrigued and moved by the documentary’s unprecedented framework for understanding one of the giant figures of our times.