Joellyn Cicciarelli | Working in Faith: Behind the Lens 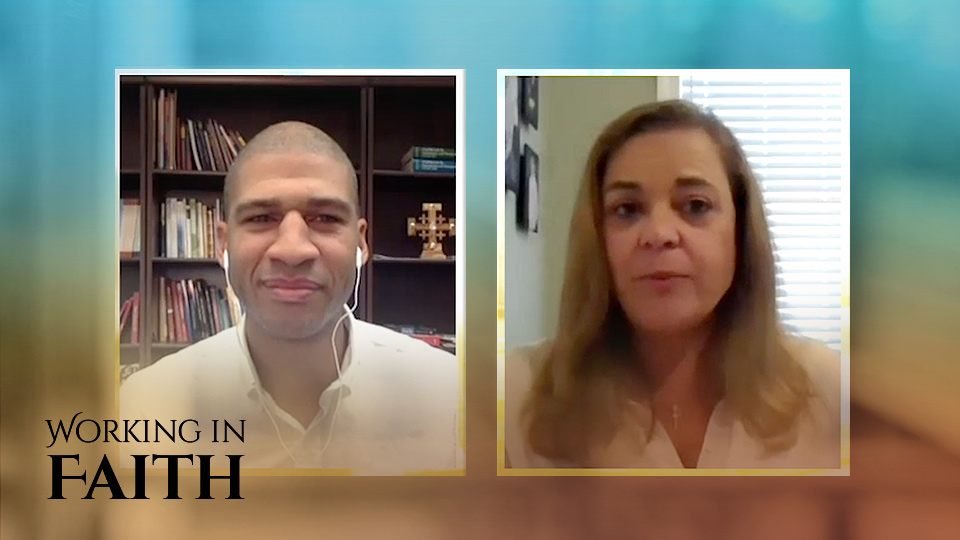 On last week’s episode of Working in Faith, I had the opportunity to interview the president of Loyola Press, Joellyn Cicciarelli. As an avid reader myself, I was excited to see what I would learn from someone who works in the world of books. A major takeaway from the interview was that people’s accumulated knowledge, education, and experience set the stage for future opportunities. In the case of Joellyn, her journey began as a teacher, then an editor, followed by a freelance mix of editor/writer for nearly a decade. These accumulated skills allowed her to start a career with Loyola Press as a director, then to VP of New Product Development, culminating in her current position as president of the company. Her story is a reminder to do the best we can wherever we are and that life will present new opportunities that align with the skills we have cultivated. One of the opportunities Joellyn and I spoke about was her time working with Mr. Rogers. Yes, that Mr. Rogers. The one with the world famous neighbourhood, Mr. Rogers. The funny thing is that I initially did not plan to ask about her time working there. I thought to myself “I’m sure it gets overasked, so I’ll leave it alone.” Luckily for me, our conversation raised Mr. Rogers as a topic, and we had an opportunity to go down that road. Personally, this stretch was my favourite part of the interview. It was heartfelt, insightful, and revealed Mr. Rogers' lasting impact on Joellyn as a person and as a leader. I have surely learned the lesson that I should not talk myself out of asking/doing something. I should make the attempt and see what happens. Thankfully, it worked out in this instance. We also chatted about two multimedia projects that are important to Loyola Press. One of them is a major video game project called Wanderlight: A Pilgrim's Adventure. It’s a unique and engaging way of teaching people, both young and old, about the Catholic faith. It does a great job of gamifying education and is a timely tool. As a result of COVID, people in most areas cannot gather together, so using a game like Wanderlight still enables people to learn about the four pillars of the Catholic faith. The other multimedia project is their Ignatian Spirituality service. It is an expansive repository of knowledge centred on Ignatian Spirituality. What is that? Dive in and find out! Although I came into the interview with the expectation to learn from and about books, the greatest teaching moments came from life experiences. If you didn't get the opportunity to see this episode when it aired last week, you can still catch it again at the following times: Tuesday, February 2 at 7 pm & 11 pm ET Wednesday, February 3 at 4:30 am & 12 pm ET You can watch on the Salt + Light Media website, on Roku, or on your local Salt + Light TV channel.

Join us as we explore the work and faith lives of lay Catholics, only on Salt + Light TV!