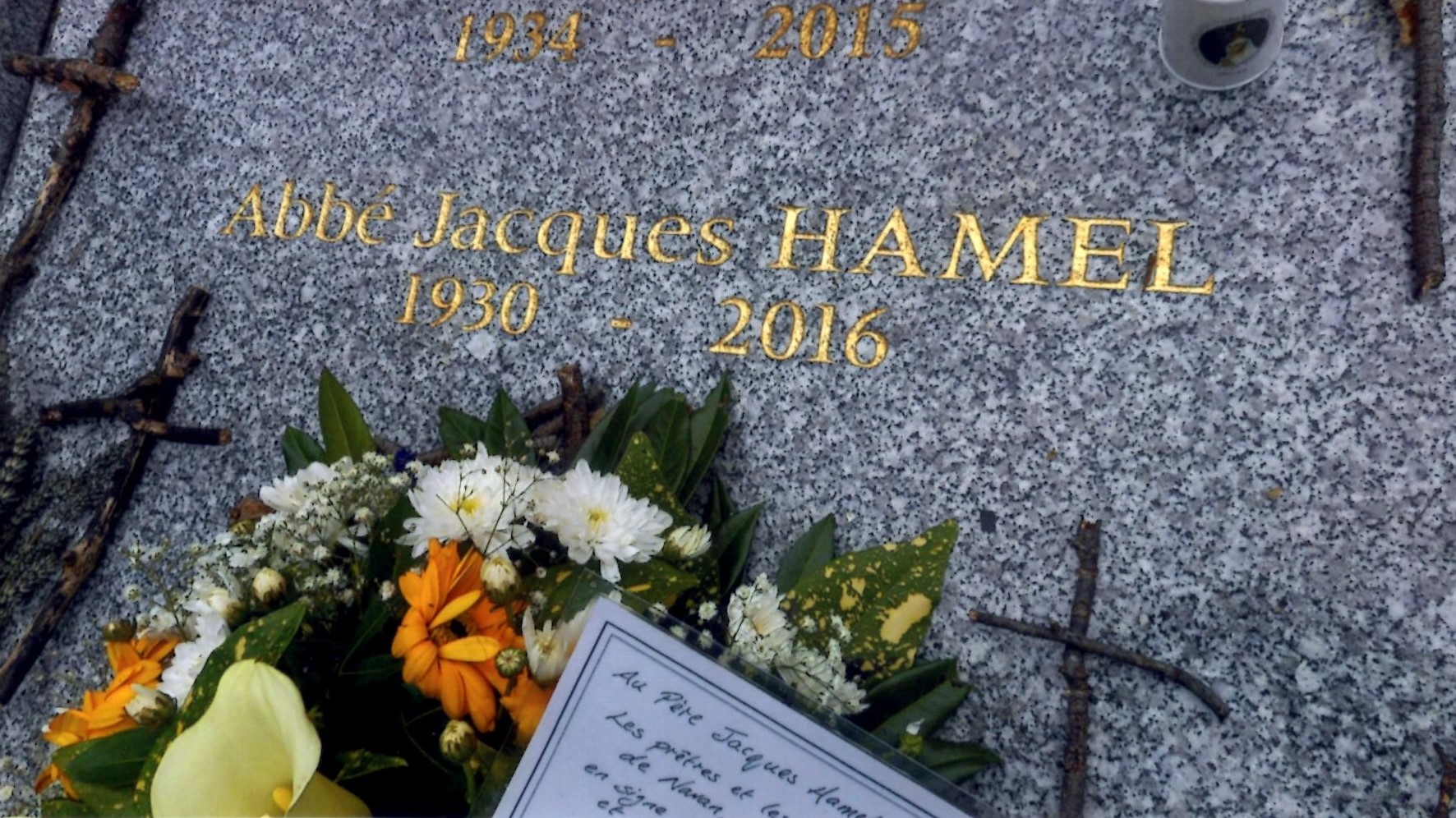 The grave of Fr. Jacques Hamel, who was murdered by terrorists on July 26, 2016. Photo credit: Gérard on Wikimedia Commons, cropped and used under the terms of license CC BY-SA 4.0
Five years ago today, French Catholic priest Jacques Hamel was murdered in the middle of Mass by two young terrorists. His killing took place in the context of the religious and communal violence that struck France in particular, but Western Europe more generally, during the second half of the 2010s.   A wave of violence  Most of us will obviously remember the attacks against Charlie Hebdo, which occurred on January 7, 2015, or the ones on November 13, which struck the concert at the Bataclan theatre in Paris. The experience of this violence had then aroused a wave of support for France from the international community, but it also inspired important reflections on the ways to build common ground in a culturally, linguistically, and religiously diversified society. Explanations for this situation have been numerous. Rightly so, many people pointed to the international geopolitical context, particularly linked to the Syrian Civil War, but also to the reality of economic inequalities and the extent of political and social demands in the Arab-Muslim world. Also, in the wake of these complex political and religious conflicts, there was an intelligent emphasis on the importance of a sober and careful interpretation of the facts involved and the need to recognize that, despite the violence, the vast majority of Muslims, whether in the West or elsewhere, share an ideal of peace deeply rooted in the human heart.   Dying in hatred of the faith The attack on the church of Saint-Étienne-du-Rouvray on July 26, 2016, during which Father Jacques Hamel was murdered, has naturally also been the subject of various explanations, linked to the interpretative lens through which the event was viewed. If we can agree on the obscene and completely erratic character of the murderous act as such, it would be highly appropriate for us to understand it in the light of the symbolic framework within which it took place. It was as a priest celebrating the sacrament of the Eucharist, "the source and summit of the Christian life", as our Holy Mother Church teaches us, that Jacques Hamel was put to death, kneeling at the altar, by two young men claiming to belong to the so-called Islamic State, which has since been considerably weakened. As such, it is reasonable to understand that Jacques Hamel's murder was linked to his faith and that in this sense he died in odium fidei, that is, in hatred of the faith. His last words ("Va-t'en Satan", meaning in English "Go away, Satan"), indicate this. Pope Francis, reacting to the circumstances of Father Jacques Hamel's death, argued that "killing in the name of God is satanic", thus targeting the real culprit of this act of persecution.   Martyrdom: witnessing Christian hope Father Hamel's death made him a martyr. If he took the royal road in the evening of his life, it is because of the religious hatred that corrupts the hearts of those who are its prisoners. However, the testimony of Father Jacques Hamel was not in vain, having attracted the attention and support of hundreds of thousands of people around the world. Calls for official recognition of his ultimate sacrifice by the Church quickly unfolded, so much so that Pope Francis quickly lifted the otherwise mandatory five-year delay before a process for his eventual canonization could begin. Jacques Hamel is thus recognized by the Church as a servant of God, and his story – his martyrdom – and the depth of his lucidity in the face of evil continue to move us, but also to make believers and non-believers around the world reflect. We, who live in peaceful and comfortable Western societies and, moreover, are heirs to a Christian civilization, do not spontaneously have a sense of sacrifice. It is a state of mind that must be cultivated in order to understand the true nature of martyrdom, the ultimate testimony of faith, which was desired, at times even to excess, by the first Christians. This sense of sacrifice, which is imposed on those who must experience it, is the most eloquent expression of the tragic character of our existence: through trial – sometimes the ultimate trial – is found hope for salvation.