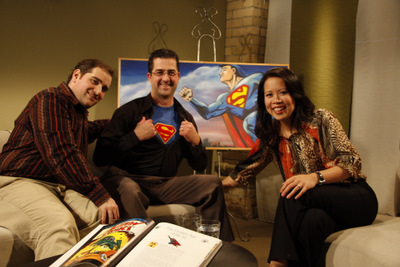 Superman, Batman, Nightcrawler, Punisher, Jake Sully (Avatar) – believe it or not, these names come up in conversation on this Thursday’s Catholic Focus.
Yes, that’s because this episode is titled, “It’s a Bird, It’s a Plane… Oh, it’s God: The Exploration of Humanity’s Search for a Saviour through the Superhero Mythology”. Just kidding, that’s not the whole title – just take out everything after the colon. In numerous off-camera conversations with Cale Clarke, Director of FX: The Faith Explained Seminars, I don’t know how many times superhero names came out of his mouth. And how many times he engaged my husband Richard Valenti in conversation about their favourite superheroes, which would leave me and Cale’s wife Trish talking about chick flicks by ourselves. But soon I realized that it’s not only Cale and Richard who love superheroes. Our culture spends millions on them – producing and watching movies about them, creating comic book series and other novelty items, even forming Facebook groups about them. 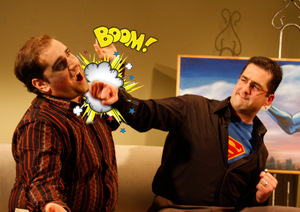 And so, Cale, Richard, and I wanted to explore the phenomenon of comic book superheroes and how we as Catholics can use them to evangelize in today’s pop culture. In this episode of Catholic Focus, we are joined by people who use superheroes to reach young people, whether it’s through film discussions or homilies peppered with Star Wars analogies. You’ll meet Fr. Michael Mireau, who dressed up for our interview in his Superman sweatshirt. He uses Star Wars in his homilies, and they’re quite popular in Leduc, Alberta and beyond! (Check out fathercatfish.com.) You’ll also meet Valentine De Landro, an illustrator who has done work for Marvel Comics; Christopher Giardino, a freelance screenwriter and producer who loves dropping by Toronto’s Silver Snail comic book store every now and then; and Danielle Jones, who has learned to have more of an emotional attachment to stories because of comics journalism. So join us on Thursday, January 28th at 7 and 11 pm ET for It’s a Bird, it’s a Plane… Oh, it’s God! Till then, I'm up, up and away...