Is Pope Francis is a heretic? No, but he does raise questions 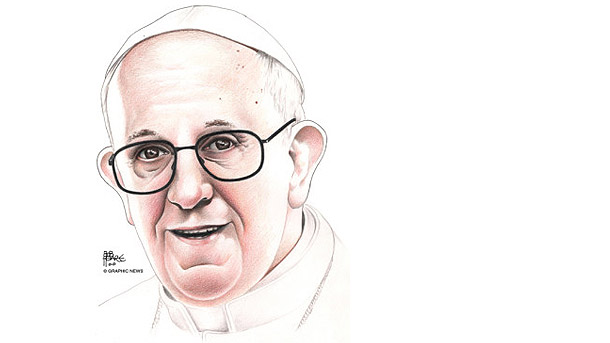 - Drawing of Pope Francis courtesy Graphic News The following article appeared on the RNS (Religion News Service) on May 24, 2013.

It might look that way from the eye-catching headlines this week that made it appear everyone was bound for heaven — “even atheists!” — thanks to Jesus’ death on the cross. The passage that prompted the reports came from Francis’ brief homily at the informal morning Mass that he celebrates in the chapel at the Vatican guesthouse. Speaking on Wednesday (May 22), Francis said that as human beings created in the image of God, everyone has a “duty to do good.” “The Lord has redeemed all of us, all of us, with the Blood of Christ: all of us, not just Catholics. Everyone! ‘Father, the atheists?’ Even the atheists,”he said, answering his own query. “Everyone! And this blood makes us children of God of the first class! We are created children in the likeness of God and the blood of Christ has redeemed us all!” Cue the jaw dropping and head scratching. Atheists were pleasantly surprised, conservative Catholics were dazed and confused, and the pope’s comments raced around the Internet; for a while they were the second-most shared piece on Reddit. So was Francis preaching a form of “universalism”? That is the unorthodox teaching that says, essentially, that all faiths are equal and all are going to heaven, especially if you are nice to people here on earth. It’s also a heresy that Francis’ predecessor, Benedict XVI, spent a career quashing every time he thought he thought he spied a hint of it in some theologian’s writings... read more