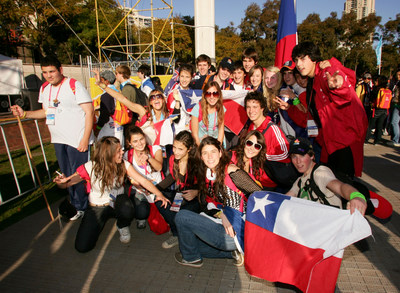 It's still over two years away, but already there's a buzz about World Youth Day in Madrid. More accurately, there's a ringing... as in a cell phone ringing. Last week Zenit News released an interview with Santiago De La Cierva, Director of Communications for WYD Madrid 2011, who is also the founder of the Rome-based TV news agency Rome Reports and a professor of Communication at Rome's Pontifical University of the Holy Cross. De La Cierva tells Zenit that Madrid won't be trying to outdo Rome or Sydney (and certainly not Toronto!) with new features or events. Instead the WYD Madrid team is looking at what Sydney did right and is going from there. The WYD Sydney team didn't add new features or events to the week, but did harness the power of communication technology. For the first time ever WYD organizers took into consideration the fact that most pilgrims would come equipped with cell phones and other such paraphernalia and worked those technologies into their communication plan. Pilgrims could sign up to recieve daily text messages from Pope Benedict XVI. Australia's national telecomunications provider set up digital prayer walls at all event sites. Pilgrims could text message and e-mail their prayers to a special phone number or e-mail address and those prayers would be put up on the digital wall. WYD 2008 also served as the official launch-pad for Xt3.com, a Catholic social networking site that features instant acess to Papal homilies and speeches and special messages from Pope Benedict only for Xt3 users. Think Facebook gone Catholic. While there is a long way to go before the specific details are finalized, De La Cierva tells Zenit that Sydney showed the world that a fundamental aspect of WYD is networking, building a social network of like-minded, like-hearted young people, willing to manifest God's presence in the world. Young people today build their own personal networks using modern communication tools like social networking sites, via Blackberries or other such omnipresent devices. The Madrid team wants to harness the power of those tools, following in the footsteps of their predecessors in Sydney. The mix of elements promises to deliver perhaps the most uniquely flavoured World Youth Day yet... just don't forget your iPhone!