Interview with the Pope on his return flight from Mexico 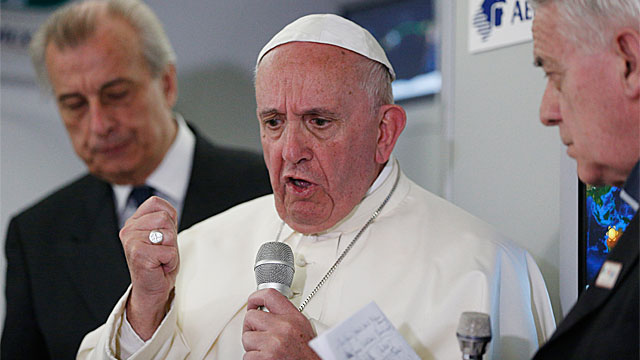 Vatican City, 19 February 2016 (VIS) – As is customary in his apostolic trips, the Pope answered questions posed by journalists during the return flight to Rome, on his visit to Mexico and his encounter in Havana, Cuba with the Patriarch Kirill. The Holy Father addressed a series of themes that ranged from his Mexican experience to the problem of paedophilia, immigration to the European situation, as well as the repercussions of the document signed with the Patriarch of Moscow and All Russia, the law on civil unions and the various problems linked to the family. He also expressed his hope to meet with Imam of the Mosque of Al-Azhar and revealed that he would like to visit China.
The following is a summary of the questions asked by journalists and the replies given by the Pope: