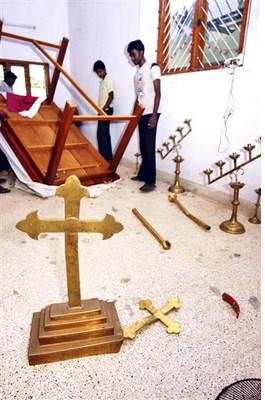 The Archbishop of Bombay is calling the violence in India against Christians by Hindu extremists "inexplicable," a "disgrace" and "madness,"
Cardinal Oswald Gracias made the comments to L'Osservatore Romano earlier this week. Anti-Christian violence has ravaged the country after the murder of a Hindu leader by Maoist rebels in late August. Perhaps the most affected area has been the state of Orissa where upwards of 40 Christians have been killed, more than 4000 houses have been burned and as many as 50-thousand have fled to surrounding forests or refugee camps. Last week in the state of Madhya Pradesh the Jabalpur Diocesan Cathedral St. Peter and Paul was set on fire by Hindu fundamentalists. In Magalore alone – a south-western Indian city with a high Catholic population -- more than a dozen Christian Churches of different denominations were attacked and desecrated. One Archbishop in Karnatka, Archbishop Bernard Moras of Bangalore lamented “I publicly say we are deeply hurt.” Until the passing of a resolution in the European Parliament on Wednesday that called for an end to the violence, compensation for those affected, and protection for India’s Christian minority, the international community has been largely silent on the matter -- a fact that the Archbishop of Genoa, Italy, noted this week at a meeting of the Italian Episcopal Conference. At the meeting, Cardinal Angelo Bagnasco, denounced the violence in the region calling it “Christian-phobia.” He also condemned the "contempt for the law, the impunity of the culprits, the disinformation of the press, the embarrassment of local politicians and the silence of the international community." In the wake of Christian persecutions and slayings in India, as well as Pakistan and Iraq, the Cardinal also offered some very important advice. As a sign of solidarity the faithful should pray for those who are suffering the persecution: "In the Church no one is a foreigner; if one member suffers, all members suffer with him." To the suffering members of the Indian Church, Indian Cardinal Gracias advised "We must not give in to the temptation to resignation, and even less so to that of vengeance. In the end, it won't be fundamentalism that prevails. Prayer, including for those who hate us, is our main weapon," adding "All persons of good will in India, whether Christians, Hindus or Muslims, are horrified and astonished by the diabolical hunt of Christians to kill them and destroy their homes and churches." At the same time he acknowledged "I don’t think I am wrong in saying that this campaign of hate against Christians is due to the total inaction of the local government." Catholic Church leaders in India have requested meetings with government officials. They continue to wait for an audience. Catholic Bishops' Conference of India spokesman Father Babu Joseph suggested to Catholic New Service "there is a clear conspiracy to terrorize the Christian community." The motivation? Some have suggested a connection to an upcoming national election next year. Others speculate it is because Christianity empowers the poor and upsets the class system. Regardless, the violence continues. Most recently two lay people were killed, and a Catholic priest strangled in his hermitage -- the tabernacle desecrated. Inexplicable. A disgrace. Madness. - For more on the situation in India: