In Solidarity with Amatrice 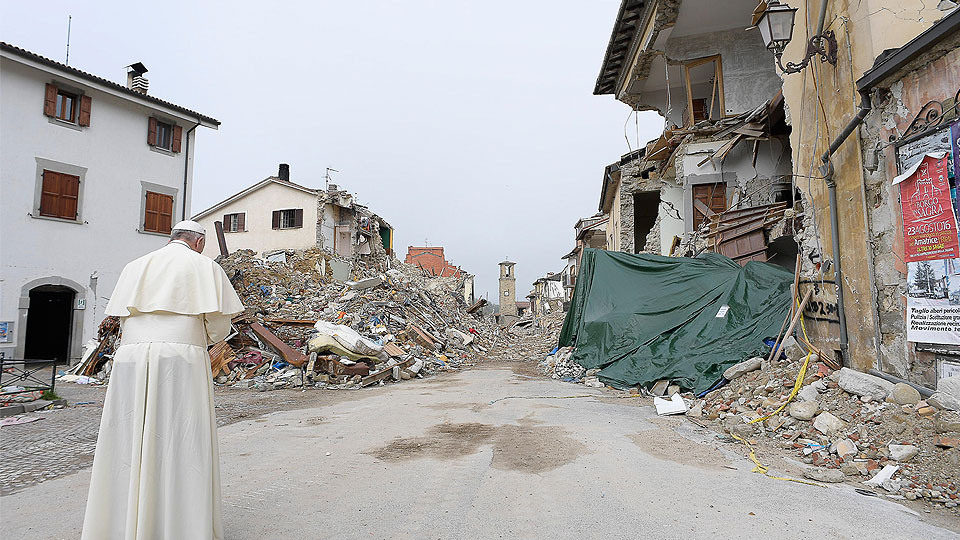 CNS photo/L'Osservatore Romano
Last Tuesday, on the feast of St. Francis of Assisi, the patron saint of Italy, Pope Francis made a surprise visit to the areas affected by the earthquake last August. The Holy Father arrived in Amatrice, before going to Arquata, Accumoli and Pescara del Tronto, explaining his visit with these words:

"I thought long and hard in the first days of these many pains that my visit, perhaps, would be more of a hindrance than a help, a greeting” he said. “I didn’t want to be a bother so I let a little time pass, so that some things could be resolved, like the school. But from the first moment, I felt that I needed to come to you! Simply to express my closeness to you, nothing more” he continued. “Solidarity and prayer: this is my offering to you. May the Lord bless you all; may Our Lady watch over you in this moment of sadness, pain, and trial".

The Pope arrived in the morning in Amatrice, accompanied by the Bishop of Rieti Monsignor Domenico Pompili, where he met school children in elementary and secondary schools. Pope Francis embraced and greeted them one by one. Then he spent half an hour listening to the stories of the young people. He later stopped, alone, and in silence to pray in front of the rubble. In the afternoon, the Pontiff was in San Pellegrino di Norcia and entered the red zone along with the local bishop. Shortly before the arrival of the Pope, an earthquake of a 3.6 magnitude, whose epicenter was very close to Norcia, was clearly felt by its residents. “Let’s move forward, there is always a future” was another phrase the Holy Father repeated several times during the day, always renewing the invitation for people to pray for him. Everyone was surprised by the sudden trip, including the mayors of each town. In fact, the Pope didn’t have his usual security, which surrounds his planned visits. The decision was only made known on Tuesday morning around 7 am. Pope Benedict XVI made a similar trip in April 2009, to Onna, in Abruzzo, which was struck by an earthquake along with other small villages. He wanted to bring comfort to the people of the city. And now, seven years later, it was Pope Francis who went to deliver a message of the Church’s closeness to those affected last month, and who are working hard to get back to normal.