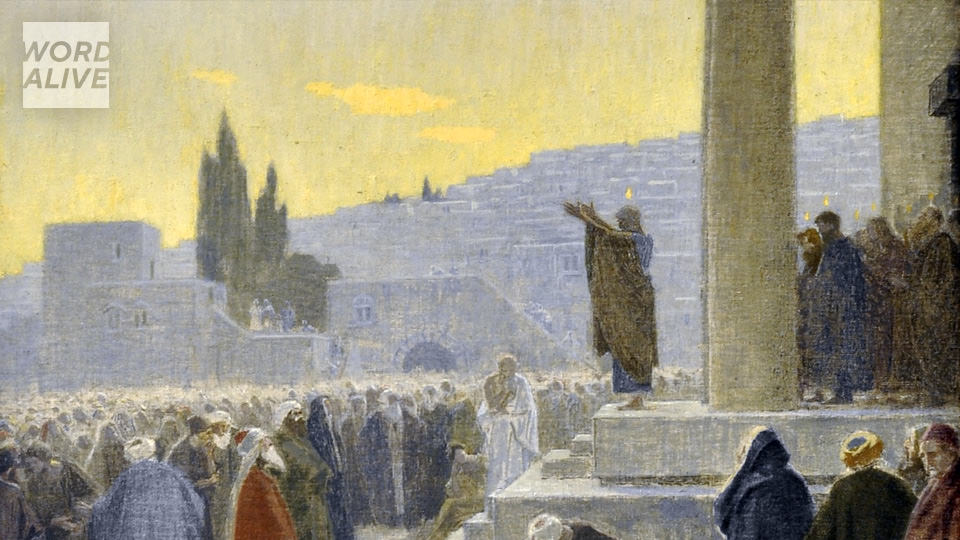 A reflection for Pentecost, Year B

I’ve always loved the account of the Holy Spirit being poured out upon the apostles, causing them to speak in tongues and languages that defied linguistic boundaries and penetrated the hearts of even those from foreign lands. Language barriers can leave us feeling isolated, confused, and misunderstood. Many years ago, my husband and I were informed that our eldest son was on the autism spectrum. We were surprised, as my experience with children on the spectrum was through a few of our cousins’ children, who were lower functioning and had great difficulty with verbal communication. Our son was said to have Asperger’s Syndrome, someone more high functioning on the spectrum, but now that term is no longer in use. It meant that Liam was verbal. Perhaps he was too verbal, as his brain was filled with so many words that he could stumble as he sifted through the files trying to find the perfect word. I’d point to the bathroom sink water faucet. “Liam, what’s this?” He’d wrinkle his brow and muster out “...faucet, tap, spout, spigot...” At first, his diagnosis made me feel somewhat helpless. I felt ill-equipped to parent him but soon found the experience to be intriguing and adventurous. Liam was a mystery unfolding before me. I loved that he saw the world and processed things differently. I was blessed that he could tell me that he was on the verge of a tantrum because there was melted cheese on his sandwich or explain to me why he liked rapidly waving his hands in the air. My heart went out to the parents of those children who were mostly non-verbal, who would give anything to have a conversation with their child, to ask them the countless questions that plagued their minds, to find a true path through the obstacles keeping them from a deeper understanding. A few years ago, when Liam was about 13 years old, we visited my aunt. My cousin was there with his son, who covered his ears and cried out as I reheated some food for Liam. My cousin quickly explained that the microwave bothered his young teenager. Liam responded with a sympathetic smile. “I understand,” he stated. “Those noises and vibrations can sound louder to us than others. They can hurt if we don’t make other noises that soften their sharpness.” My cousin's eyes widened. Liam continued, “I’m on the spectrum too, and some noises used to really bother me.” For the remainder of the trip, I saw Liam spending most of his time with the other teenager. He played the piano with him, trying to learn The Young and the Restless theme to appease his kindred companion. My cousin and his wife had many questions for Liam. They seemed so grateful to speak with someone who could better relate to their son’s experience of the world. I wasn’t able to witness the full conversation as I tended to the needs of my other children, but when I’d look in from time to time, I saw my cousin and his wife on the brink of tears. They were captivated, their hearts laid bare. They laughed and locked eyes several times, as Liam seemed to explain something that they must have suspected all along about one behaviour or another. Although all children on the spectrum are different, there was no doubt that Liam had a special connection with my cousin’s son. My cousin and his wife were surprised that their son made eye contact with Liam saying, “This Christmas.” Liam told me that meant that he was looking forward to seeing him again. I think the Holy Spirit was working through Liam. Like the apostles at Pentecost, he was able to  break through language barriers and offer insight, hope, and connection. With the apostles, I rejoice that the Holy Spirit is calling everyone. He is not hindered by even the most cumbersome boundaries. He is able to move and ignite a flame in our hearts, leaving the isolated with a lasting sense of belonging – of being understood.

Carissa Douglas is the mother of 14 children ages 18 and under. She is the author and illustrator of the Little Douglings Catholic children’s book series and the Dougling Adventures junior fiction novels. She is the producer of Shalom World Television’s Little Douglings: Play and Pray. Together with her husband, Patrick, she is passionate about finding new ways to evangelize and to share the richness of the Catholic Faith.