This trip to Cyprus has indeed been a full one with, no doubt, reams of fruit yet to come.
One highlight of the the trip came to us only after the cameras stopped rolling yesterday. Catholic News Service's Cindy Wooden writes about a moment involving the grand sheik of a Muslim spiritual movement from northern Cyprus crossing paths with the Holy Father. The Muslim leader of northern Cyprus invited the Holy Father to cross the UN-patrolled border even though he himself would not cross. Though Pope Benedict did not travel to the northern Turk-occupied part of Cyprus, he did have a Providential exchange with Sheik Nazim, a small 'L' leader in the Muslim community (the sheik's authority, Cindy emphasized, extends only to his disciples). 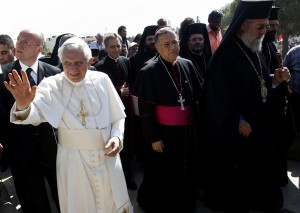 The moment took place as the Holy Father left the nunciature en route to celebrate Mass at Holy Cross Church yesterday. The sheik was seated in a chair on the street where the Holy Father stopped to greet him. The sheik told the pope, “I’m sorry. I’m very old, so I sat to wait,” the spokesman said. The pope responded, “I’m old, too,” he said. Sheik Nazim brought the pope a walking stick and a set of Muslim prayer beads, Father Lombardi [the Vatican spokesman] said. The pope gave the sheik commemorative medals of his pontificate. The sheik asked the pope if he could embrace him, the pope said, “yes,” and the whole thing was over in just 3 or 4 minutes, the spokesman said. “It was brief and very beautiful.”

On his last day in Cyprus, Pope Benedict celebrated Mass at the Elftheria Sports Centre in Nicosia. The following is the full text of his homily: