Il Divo: Live at the Coliseum, on S+L

I’m probably one of the few people who’ve never heard of Il Divo. When I watched “Il Divo: Live at the Coliseum,” I really could not believe my ears (and my eyes!). 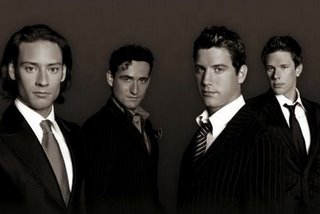 Here are four men from four different parts of the world singing with such powerful operatic voices. Not only are they spectacular singers, they were all young and they all looked like Calvin Klein models. What’s up with that? If you want to be blown away by great voices, handsome faces, a breathtaking locale such as The Coliseum, and beautiful cinematographic work (honestly, the Coliseum is already beautiful, but the way it was lit for the concert, and the way the concert was shot and put together – bellissimo!). They’ll be singing four songs: Power of Love, Adagio, Amazing Grace, and Hallelujah. Apparently, the story of the awesome foursome is this: American tenor David Miller meets Spanish baritone Carlos Marin meets Swiss tenor Urs Buhler meets French pop singer Sebastien Izambard through Simon Cowell, talent judge of American Idol (among other things). Basically Simon Cowell brought them together in 2004 through a worldwide audition. Best known for their unique blending of pop/romantic songs and operatic technique, they scored 36 number 1 chart positions across 26 countries with their first three albums. The four took a break after a bit of time, but now they’re back – more mature, more refined, more confident. From their website, www.ildivo.com:

"I think there's something missing in today's music, that hasn't been around for a couple of decades, of the real voice shining through the production," declares David. "This is something we have strived for since the beginning. It's kind of old school. Real voices, real lyricism, real artistry." "In Il Divo, it's something special when we sing all together," adds Carlos. "It doesn't matter who sings the melody and who sings the harmony, it feels like a big wave, a tsunami is arriving. It's amazing, the feeling, its so powerful, even when I am on stage with the other guys singing, I still get goosebumps."

So, don’t miss the experience of Il Divo: Live at the Coliseum on Salt + Light Television: