I Call You Friends

“Take your shoes off and leave them here. Proceed through this door. Leave your clothes, all your clothes in one of these shelves. Go through the shower. Wash well. On the other side you will find clean socks and coveralls. I’ll meet you on the other side.”
With those words Wally, our faithful cameraman and I were left. Our camera and tripod had to be wiped down.
Very strange feeling. What kind of facility was this?
It was like that movie Outbreak with Dustin Hoffman and Rene Russo about the outbreak of a deadly airborne virus. 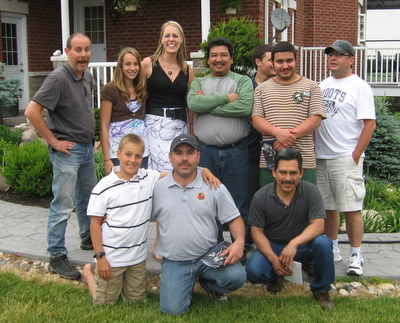 We were at Cronin Farms to do a segment on Migrant Workers. But don’t get me wrong. The workers are not kept in a sterile labour prison camp: The pigs are.
Mike and Amy Cronin are pork producers. They live in the northern part of the Diocese of London. Their operation involves the breeding and birthing of pigs for consumption. They run a bio-secure facility (hence the showering before entering) to protect the animals from infection.
The reason why we were there is that Mike and Amy employ five Guatemalans who are in Canada because of the temporary workers’ program. Juan told us that about 80% of his salary goes back to Guatemala to his wife and 11 year old son. He is an engineer by trade, but had lost his job with the new government and had been struggling since. He came to Canada over a year ago.
In a way, these guys are not really temporary workers. They are not the traditional ones who come for six or so months to work in the fields during the planting and harvest seasons. They are here with a year-long visa, only returning home for three weeks while their visa is renewed. The nature of the work at the Cronin Farm is that there is work all year round.
I live very near the Holland Marsh, north of Toronto, and am familiar with many of the farms in that area that employ migrant workers. Many are forced to work under sub-standard conditions. Many receive poor training and therefore are more subject to injury. They are forced to work seven days a week. Sometimes they are not allowed to leave the farm. And they also live in sub-standard conditions.
What we saw at the Cronin Farm was admirable. Juan and his four work-mates live in a house (the old Cronin home). They each have their own room. They have satellite TV and two vehicles to use. They pitch in for their own meals, but often they are invited for a meal with Mike, Amy and their six children. But it’s not about what material possessions they have. It’s really about the relationship.
Juan shared with us at the dinner table that they are very grateful to Mike and Amy for their generosity. They don’t call them “boss” but “friends.” And that’s what we saw. A couple who recognised the dignity of all, who gave their employees only what they would have for themselves and their children. It was remarkable. Truly, they are friends. I was reminded of Jesus’ words to the disciples at the Last Supper: I no longer call you servants; I call you friends (John 15:15).
Keep your eyes on our Weekly Perspectives’ topics in the coming weeks, as we will be dealing with the issue of migrant/temporary workers. So stay tuned.