I Am a Sinner: A Shepherd Among His Flock 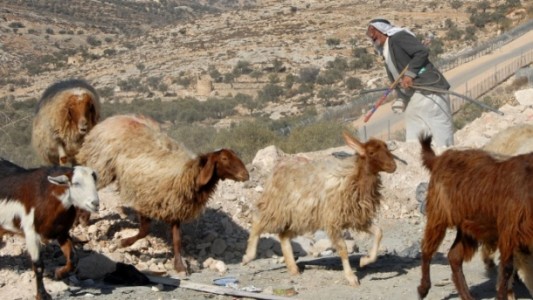 By Quentin Dupont, SJ
"I am a Sinner" This is Pope Francis’ first response–after a few moments of reflection–to the softball question ‘Who is Jose Maria Bergoglio? It may be a softball question, but it’s no softball answer, especially in Francis’ deepened reflection: “I am a sinner whom the Lord has looked upon.” The Pope insists that he does not mean sinner as a “literary genre,” a mere figure of speech, and goes to show this throughout the rest of the interview: he’s someone who’s made mistakes, someone who’s known failure.
To be sure, the fact that the Pope defines himself as a sinner puts him squarely in the Jesuit school of self-description. Some time ago, an official document of the Jesuits offered that Jesuits were “sinners, yet called to companionship with Christ as Ignatius was” (General Congregation 32, decree 2, #1). What’s more striking, is that the core of this definition is not proper to Jesuits, or even to the Pope. Any Christian is a sinner called to companionship with Christ, that’s just what it means to call oneself “Christian.” And so, with his answer of “I am a sinner,” His Holiness – as Popes are often called – defines himself first and foremost as a Christian, one among the flock led by Christ. This is not out of step with tradition, but it does walk among Popes who try to journey with their flocks: Pius XI creating Vatican radio, John XXIII’s warm words, Paul VI walking among mortals rather than carried on a chair, John Paul II the crowd-gatherer, and Benedict the gentle shepherd turned retired Pope. And now, Francis the sinner called to follow God.
The most interesting part of Francis’ self-definition, however, is not so much the sinner part. It is the dynamic of his answer: “a sinner whom the Lord has looked upon.” For Francis, as for all Christians, the realization that our lives do not stop at our failure is the key. God keeps on loving, Christ keeps on calling: that changes everything. The Pope comes to explain this in the course of his interview, more by reflecting on his own experience than by authoritative pronouncements:
Talking about the significance of his Papal motto, he underscores the dynamic of our relationship with a God who keeps on giving mercy and on calling.
Speaking on the need for discernment, Francis engages the relational nature of Christian life. A Christian is not a simple sheep following along; every Christian has a personal relationship with God.
Offering that he prefers the word “hope” over “optimism,” Francis encourages us to “keep walking” in faith and in love. This encapsulates his own experience as a Jesuit: learning from the mistakes of his leadership style from his mid-30s, relying ever more on God, opening one’s heart to all people of good will, especially the poor, at the example of Jesus.
As a sinner called to relationship with God, in a community of likewise men and women, the Pope makes sure to tell us that we are Church, together, walking on the journey. The unique dynamic of each Christian’s relationship with Christ (redeemed and called), is thus clearly the dynamic of the Church. As we are each called to grow in hope, faith, and love, so is the Church a people walking and learning. We are each, and all, continually called to change.
Francis’ self-definition as a sinner called by Christ has serious implications about his life, his theology, his ministry. Moreover, it calls each Christian to look at her or his life with deep honesty and profound hope. We each know how we are sinners, but has the significance of being “looked upon” by God hit the depth of our hearts? Has the “shame” of not being able to measure up to Christ–something which Francis mentioned to the Jesuits in Rome last July– met God’s infinite and unconditional love? Are we open to changing what gets in our way of loving as Christ calls us to, to change even what we hold the dearest?
Make no mistake about it: by defining himself foremost as a sinner loved by God, Francis does not only show his own humility. He invites us to grow likewise.
---
(CNS Photo)