Although the Canadian Church moved the official celebration of the Epiphany to the first Sunday of January, the Universal Church still celebrates the feast on January 6th. In Rome today, Pope Benedict XVI marked the solemnity with Mass at St. Peter's Basilica and gave a homily reflecting on the significance of the Magi, or the Three Wise Men, as we sometimes call them. 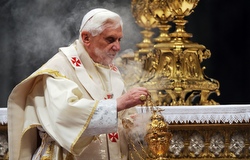